Why Winter is Flu Season

Ever wonder why December through March is the high season for cold and flu germs? Scientists at NIH may have the answer 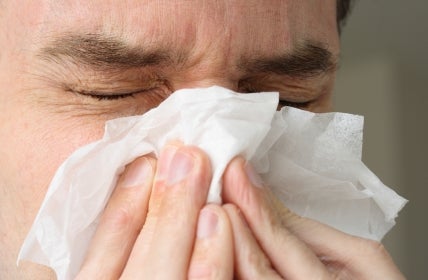 We know lipids as the molecules in cholesterol, fats, oils, and waxes (different from fatty acids, like the unhealthy transfats New York City recently banned). We’re maybe less familiar with them as a key structural component of cell membranes. They are not only part of the mix that makes up the semipermeable membrane between the cell wall and the guts of a cell, they’re also responsible for shielding a cell’s organelles, enclosing each in a protective membrane.

Lipids also make up the protective outer layer on viruses (called an envelope). Scientists at NIH have recently discovered that the lipid coating on flu viruses melts at around 60 degrees Fahrenheit and solidifies into a gel at just above freezing (fortunately for us, our lipid membranes don’t behave similarly). Basically, this is the evidence for why flu season peaks during the winter.

The viruses are able to firm themselves up at colder temperatures in order to survive traveling from person to person. Once inside their victims, body heat remelts the lipid coating, allowing the virus to infect the cells of its host. In the warmer months, the viruses dry out, weaken, and go dormant. Researchers hope to use this information to study ways to reduce infection during the winter months, possibly through more effective lipid-dissolving detergents or by encouraging people to spend more time in warm environments.