Injectable Sponges Can Expand Inside The Body To Deliver Drugs 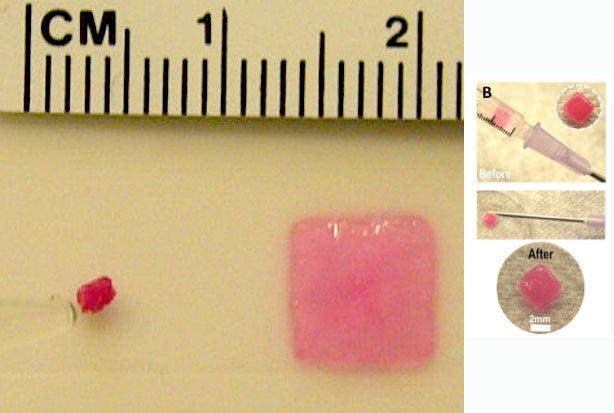 A new class of gel-based sponges can be molded to any shape, soak up drugs or stem cells, shrink down and be injected into the body, where they inflate to their original size and leak out their contents. They work kind of like those “dinosaur egg” sponges you can get at museum gift shops, where contact with water inflates little pellets into soft dino-shapes. Only they’ll be inside your body.

Bioengineers at Harvard and Caltech designed the sponges, which are primarily made from alginate, a gel made from algae. They can be molded into any shape or size and contain large pores, which allow liquids and large molecules to pass through. The pores can also hold cells, proteins and small-molecule drugs, which can then pass into the body when the alginate starts to break down.

Bioengineers at Harvard pushed pink squares, hearts, and stars through a syringe to demonstrate the versatility and robustness of their gel.

They could be promising new tissue scaffolds at sites of injury or infection, according to David J. Mooney, a bioengineering professor at Harvard’s School of Engineering and Applied Sciences. They could transplant stem cells, bulk up tissue that’s been lost or degenerated, or even transplant immune cells, Mooney said. Because they can be built to any shape–the team made hearts, stars and squares–they could theoretically be used for any size or shape area in the body.

Over time, the alginate safely degrades in the body, leaving nothing behind but the drugs, cells or proteins it delivered.

The research team formed the sponges using a process called cryogelation, which causes patterns of ice crystals throughout the alginate as it is frozen. When they melt and the water flows away, the gel is left with a network of pores. This also enables the alginate to be soft and spongy, rather than brittle like alginate would otherwise be.

Led by postdoc Sidi Bencherif, an associate in Mooney’s lab at SEAS and at Harvard’s Wyss Institute, the researchers shoved their sponges through a syringe to prove the material keeps its shape. In lab tests, cells that were delivered with the sponges worked better than transplanted cells that were injected in a standard way, with no sponges. The next step is to refine the sponges so they release their contents in precisely timed ways, Bencherif said.

The research appears in the Proceedings of the National Academy of Sciences.