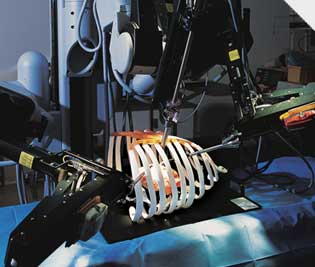 A tug here, a flick of the wrist there, and a neat row of stitches appears in the defective heart. I pause, consider the consequences of botching the close, and throw in a few more for good measure.

Done. My first surgery. I had figured repairing a defective heart valve would be more difficult, especially considering my liberal arts degree. But as far as I can tell, my patient–a rubber heart and a plastic rib cage–will recover fully.

Of course, this was no ordinary surgery. Instead of scalpels and forceps, I was using Da Vinci, an advanced surgical robot. Traditional operations entail an 8- to 10-inch incision, but Da Vinci’s two robotic arms work through pencil-size holes between the patient’s ribs. A tiny camera enters through a third hole, giving surgeons a 360-degree view from their video console a few feet away. The robotic appendages, each with pincer-like digits, bend and twist as the surgeon moves the fingertip controls. With no gaping chest wound, Columbia doctors-who’ve done 37 robot-assisted heart operations so far-hope Da Vinci will eventually cut recovery time from 12 weeks to 24 hours.

As I’m removing my scrubs afterward, I ask Michael Argenziano, director of robotic cardiac surgery at Columbia, how my technique with the heart valve compared to that of his other surgeons. “Heart valve?” he laughs. “You were doing a coronary artery bypass.”