Your Ampakine-enhanced future is at least a few years off. For now, these "smart drugs" may be your best bet 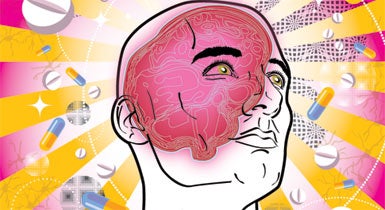 The Brain Claims:
Extract of the ginkgo tree has been used in Asia to treat all manner of physical and mental ailments for at least 1,000 years. The foul-smelling ginkgo–at 200 million years old, its the oldest living species of tree on Earth–is also purported to improve circulation in the brain, supposedly improving cognitive functioning and helping prevent neuron decay.

The Reality: In 1986 a study published in the journal Life Science demonstrated that ginkgo did indeed increase cerebral blood flow, and a 2004 Southern California University of Health Sciences experiment suggested that it improves the acquisition and retention of new memories in healthy subjects.

The Brain Claims: Made from a chemical found in the periwinkle plant, the nutritional supplement vinpocetine has been used in Europe for years as a treatment for stroke and age-related memory decline. Like ginkgo biloba, there is evidence that vinpocetine increases blood flow to the brain. As a result, some have claimed that the drug improves memory, especially in people whose memory has already been compromised by disease.

The Reality: In one study, 12 healthy women were given vinpocetine before taking a series of four mental tests. For three of the tests, vinpocetine proved no more effective than a placebo. The exception was on the test that measured short-term memory through a number-memorization task. Subjects who took vinpocetine performed substantially better than those who took the placebo.

The Brain Claims: Often called the first nootropic drug (one that enhances mental functions) and also sold as Nootropil, piracetam was first synthesized in Belgium about 40 years ago to treat memory and balance problems. Its now sold online as a cognitive enhancer.

The Reality: A 1999 German study of piracetam in young and old rats showed that the drug can improve cognitive functioning, but only in older subjects; animals that have not yet experienced cognitive decline do not show similar results. A Swiss study in the same year showed that piracetam reduced the complexity of EEG readings in humans, a result that researchers believe indicates better brain functioning. The drug has not been approved for use in the U.S.

The Brain Claims: Modafinil was originally developed in France in 1981 to treat depression. The prescription drug has since been found to help reduce the effects of sleep deprivation, and interest has developed in whether the drug could boost cognitive performance in non-sleep-deprived people.

The Reality: A 2003 British study of 30 non-sleep-deprived students found that modafinil did not boost performance on a series of cognitive tests. Still, many doctors have been known to pop the stuff.

The Brain Claims: Water hyssop, or Brahmi, has been used in Indian medicinal traditions for centuries; some Maharashtra tribes, for example, used the plants leaves to treat stuttering. Now herbal-supplement sellers tout it as improving memory and concentration and relieving stress.

The Reality: A 2002 trail involving 76 adults countered the claims that water hyssop relieves stress or ups concentration. But the substance did seem to significantly improve the ability of the subjects to remember newly learned information.

The Brain Claims: Its known that B6 is important to brain development–the vitamin is necessary for the synthesis of neurotransmitters. And a deficiency of it has been linked to various neurological disorders, from depression to dementia. Its not too surprising, then, that many people have theorized that larger amounts of the vitamin may improve cognitive functioning.

The Reality: In 2003 a coalition of British scientists reviewed years of studies of supplementary vitamin B6 use in humans who were not vitamin B6deficient and found no evidence of increased brain function.