How Do You Move An Entire Bridge? 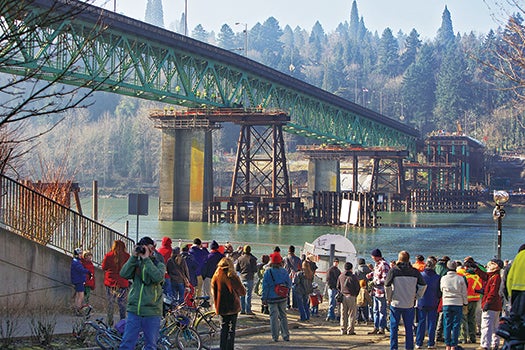 When the Sellwood Bridge in Portland, Oregon, was built in 1925, it wasn’t designed to carry 30,000 vehicles a day. Or to hold back a slow landslide. But by the 1980s, cracks were forming in the bridge’s supports, leading inspectors to rate the bridge a 2 on a 100-point federal safety scale and to eventually ban heavy trucks, buses, and fire engines. So county engineers decided it was time for a new bridge, and the least expensive option ($306 million) was to move the existing structure over to serve as a detour while a new one was built in its place. But the bridge’s rare design—a one-piece, 1,100-foot, 3,400-ton truss—posed an unusual problem. How do you move a whole bridge at once?

38-second time-lapse of the Sellwood Bridge move from JLA Involve on Vimeo.

The great shift took place over 14 hours on January 19. Between the Sellwood’s old and new locations, engineers built tracks, covered with Teflon pads and doused with liquid soap to make them slippery. Then 40 150-ton hydraulic jacks picked up the bridge and placed it on ski-like steel beams that could slide inside the tracks. Finally, a second set of jacks pushed the bridge inch by inch to its new home. (Because Sellwood’s west end had to move 66 feet and its east end only 33, the engineers developed a system that tempered the flow of fuel to each jack, controlling how fast they pushed.) The new bridge is expected to open in 2015, after which the old Sellwood will be scrapped. 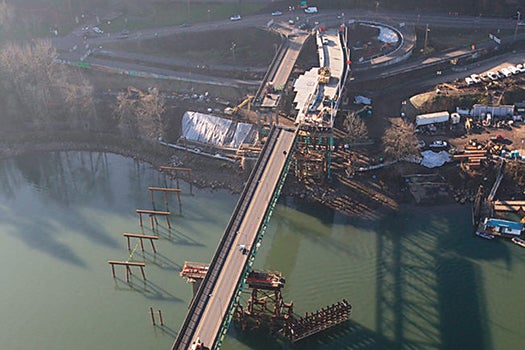