When light flashes for a quintillionth of a second, things get weird

The shortest light pulses in the world come in pairs, and scientists can now control them. 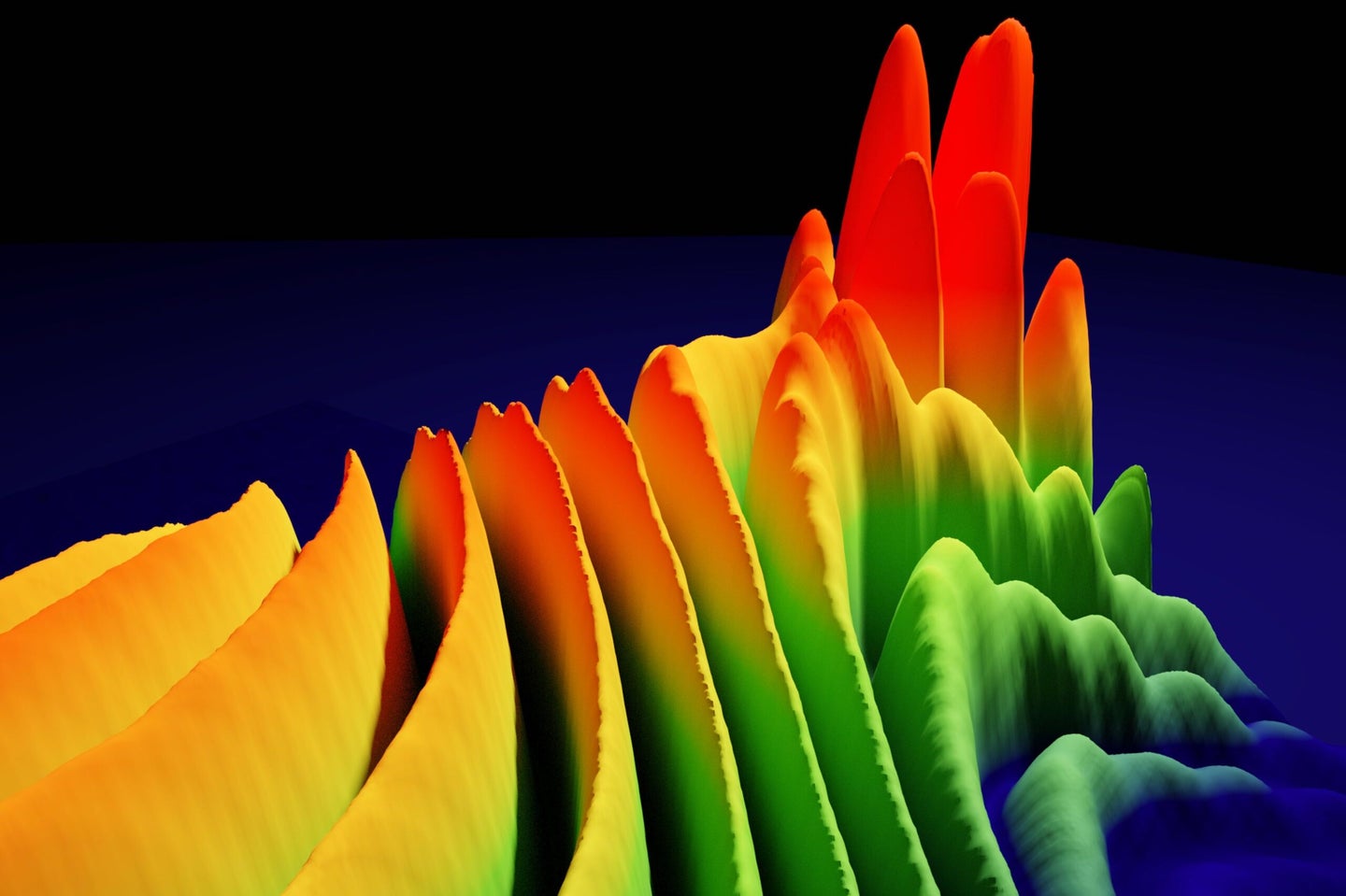 The bulb on an old-style film projector flashes some 24 times a second; a typical CRT television screen changes frame 50 or 60 times every second. The fastest cameras in the world can snap frames lasting just a trillionth of a second—short enough to watch light itself slowly creep across a surface.

That may be fast, but it’s still nothing next to the lasers some physicists get to play with. Welcome to the world of ultrashort light pulses: little blips of a light wave, lasting as little as a quadrillionth of a second after they leave the laser that makes them.

At those timescales, strange things start to happen. For instance, pulses often pop out in pairs, one after the other. Now, physicists at the Universities of Bayreuth and Konstanz in Germany have found they can control the pacing of those duos. They published their work on October 19 in the journal Optica.

Ultrashort light typically relies on a laser to produce very short bursts of light (as opposed to the unbroken beam created by most lasers you probably encounter). True to the name, those pulses are short indeed: they’re as brief as a femtosecond, or a quadrillionth of a second. Some of the absolute shortest have gone even faster—down to an attosecond, a quintillionth of a second.

If you’re wondering why anyone would bother, there are a few ways scientists can put ultrashort pulses to work. One of the most fruitful uses is spectroscopy: splitting a beam of light into its spectrum, allowing scientists to look at which colors or wavelengths are present—or missing—which can tell them about the materials that light comes from or passes through.

Using ultrashort pulses for spectroscopy allows scientists to peer into the depths of molecules and atoms, or into processes that start and finish in tiny fractions of a blink. For instance, the technology allows scientists to watch chemical reactions as they happen, something that won the 1999 Nobel Prize in Chemistry.

Ultrashort pulses can also be used to manufacture very tiny electronic parts, micrometers or even nanometers across. They’re used in medicine, too, for high-precision eye surgeries and for forging tiny stents.

But when a laser produces ultrashort light pulses, it often produces them in pairs. Like chemically bonded atoms in a molecule, these “coupled” pulses can oscillate, bouncing back and forth, or break apart into smaller bits.

“Many people who work with these lasers know that this happens, but they thought it might be a strange curiosity,” says study author Georg Herink, a physicist at Bayreuth University. “Companies try to avoid this operation mode. They just want to have a single clean pulse.”

But these coupled pulses’ unique properties had interested theoretical physicists for some time. They wondered if they could control the coupling. So, Herink and his colleagues built a ring—made of optical glass fibers like the ones that weave together the Internet—and began shooting light from a laser through the ring. The light pulses went round and round, where the researchers could watch them orbit.

Previously, the short timescales involved meant that watching coupled pulses up close wasn’t really doable, but new spectroscopy methods have changed that. “We can look at these pulses on every round trip that they do in this laser…and with that, we can now get real-time insight into these dynamics that was not possible before,” says Herink.

With this in their toolbox, they could turn to the laser itself and see why it was misbehaving. They found that, by reducing the laser’s power for a short moment, they could break the bond and uncouple two pulses. Then, by reestablishing the power, they could bind the pulses together again, with a different separation in space and time.

Now, says Herink, “you can predict where you have your pulses, and then you can even control the separations of them.”

Herink says he and his colleagues hope to build upon this work to create a system that lets them dictate sequences of short laser pulses. The methods that scientists currently use to do that can be relatively slow—taking up whole millionths of a second. By that time, the atom you want to measure may already be gone. Making the laser do the job instead is much more effective, Henrick says.

Still, it’s not certain if ultrashort-pulse-users will find uses for this ability. “My own view is that what these lasers are really good for is making one single pulse,” says Andrew Weiner, an electrical engineer at Purdue University in Indiana, who was not involved in this research. “You want to make that as clean as possible. So I think that, in most applications, you probably don’t want to do this.”

But even if most applications don’t need pairs of pulses, knowing the science behind them could help craft better lasers. “I think studying the detail of that is interesting, to really understand the physics,” says Weiner.

“All these effects are not totally understood,” says Herink.