Fed Up With Sluggish Neutrinos, Scientists Force Light To Move Faster Than Its Own Speed Limit

Our nation’s official keepers of time and other standards are breaking one of the cardinal rules: They have figured out... 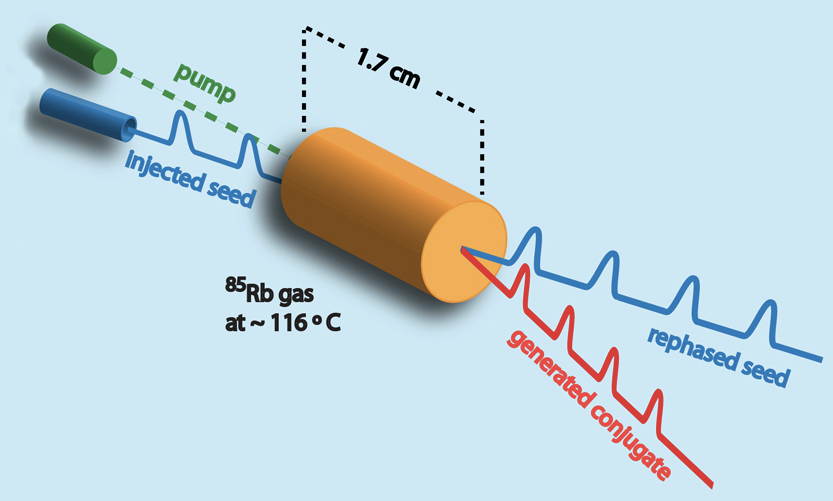 In four-wave mixing, researchers send "seed" pulses of laser light into a heated cell containing atomic rubidium vapor along with a separate "pump" beam at a different frequency. The vapor amplifies the seed pulse and shifts its peak forward, making it superluminal. NIST
SHARE

Our nation’s official keepers of time and other standards are breaking one of the cardinal rules: They have figured out how to make superluminal light pulses. This paradoxical sentence — faster-than-light light — is from a new paper explaining how to make the sine wave of light hunch in on itself and arrive a few nanoseconds earlier than it would if it had moved at light speed.

Nothing can move faster than light, as neutrinos coldly reminded us earlier this year. Einstein’s constant C, for the speed of light in a vacuum, is a universal constant. But researchers at the National Institute of Standards and Technology are playing some tricks with physics.

A short burst of light can be expressed as a curvy wave, with the hump representing the peak of the burst. The whole wave cannot exceed the speed of light, but apparently you can do some physical manipulation to that hump and make it arrive earlier or later than it’s supposed to. Ryan T. Glasser, Ulrich Vogl, and Paul D. Lett at NIST and the Joint Quantum Institute manipulated the hump using a technique called four-wave mixing. It re-arranges the light waves that comprise the pulse of light and makes the hump move forward.

The researchers pulsed ultra-short (200 nanosecond) laser pulses into a cloud of rubidium vapor, according to NIST. Next to this seed pulse, they pumped in a second laser beam at a different frequency. The rubidium amplified the seed light, so its hump hunched forward. While this was happening, photons — because light is a wave and a particle — interacted with the vapor and formed a second pulse, which could also be tuned to travel faster or slower than it is supposed to. The peaks of these light waves arrived at their targets 50 nanoseconds earlier than they would have if they were traveling at the constant C.

Aside from proving that it’s possible to bend the rules, the NIST team could use this breakthrough to study some strange quantum effects of this fast light, which could be useful in quantum information processing.