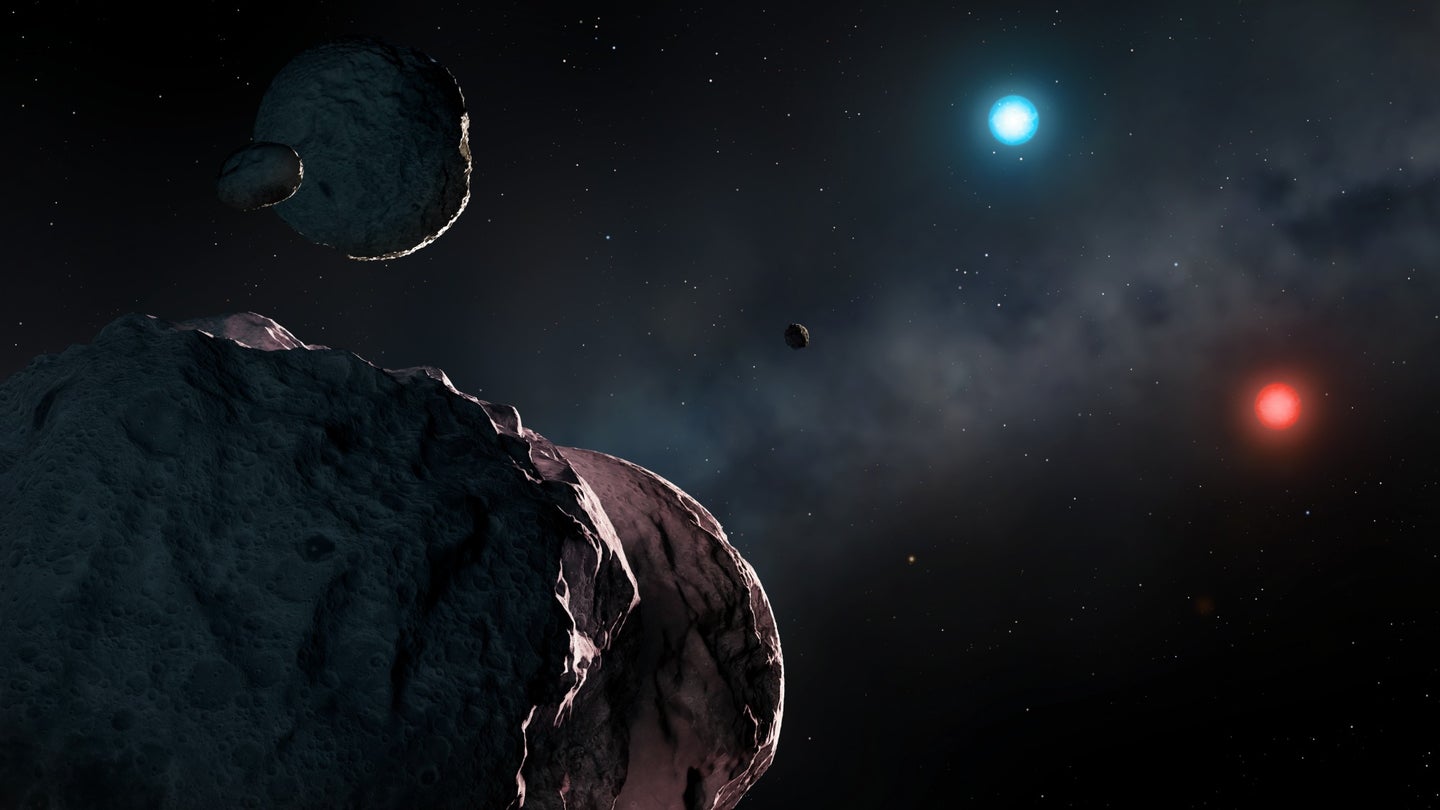 Artist’s impression of the old white dwarfs WDJ2147-4035 and WDJ1922+0233 surrounded by orbiting planetary debris, which will accrete onto the stars and pollute their atmospheres. WDJ2147-4035 is extremely red and dim, while WDJ1922+0233 is unusually blue. University of Warwick/Dr Mark Garlick
SHARE

The Milky Way galaxy is about 13.61 billion years old. The ancient galaxy is home to both our own solar system and somewhere between 100 to 400 billion shining stars. With the newest star system estimated to be only about 500 million years old, the Milky Way is pretty old as far as galaxies go. And so are many of its billions of stars.

A study published this weekend in the journal Monthly Notices of the Royal Astronomical Society proposes that the oldest star in the Milky Way is a faint white dwarf that is about 10.7 billion years old and shining roughly 90 light years away from Earth.

The inevitable fate of most stars (our sun included) is to become a white dwarf: a star that has burnt up all of its fuel, shed its outer layers, and then cools down and shrinks. While the star is getting smaller and colder, any planets orbiting it like how Earth orbits the sun, will be disrupted and possibly destroyed. The debris from these orbitals will then gradually build up on the surface of the white dwarf star.

Astronomers say that this star, named WDJ2147-4035, is the engulfed remains of recently orbiting planetesimals, or “minute planets,” that didn’t come together with other planetary debris.

In the study, the team modeled two unusual white dwarfs that were detected by the European Space Agency’s (ESA) Gaia space observatory. Both of these stars are polluted by planetary debris, with one of the stars showing an unusual blue hue, and they other very faint and red.

The team used spectroscopic and photometric data from Gaia, the Dark Energy Survey, and the X-Shooter instrument at the European Southern Observatory to determine just how long the red star has been cooling. They found that it was once a 10.7 billion year old ‘red’ star, which has now spent 10.2 billion years chilling out as a white dwarf.

Spectroscopy involves analyzing the light from a star at different wavelengths. This can show astronomers which elements present in the star’s atmosphere are absorbing different colors of light. This helps astronomers determine what specific elements are in the star’s atmosphere and how much is present. They analyzed the light spectrum of the red/white WDJ2147-4035, and found metals including sodium, lithium, and potassium accumulating onto the star, and tentatively even carbon. This makes it the oldest metal-polluted white dwarf discovered in the Milky Way, according to the study.

[Related: The Milky Way has a long history of cosmic cannibalism.]

The second star is named WDJ1922+0233. It has a blue hue, is only slightly younger than its red counterpart WDJ2147-4035, and it was was covered by planetary debris that is similar to the Earth’s crust. Spectroscopy helped the team determine that the blue color of WDJ1922+0233 is due to an unusual mix of helium and hydrogen in its atmosphere.

“These metal-polluted stars show that Earth isn’t unique, there are other planetary systems out there with planetary bodies similar to the Earth. 97 percent of all stars will become a white dwarf and they’re so ubiquitous around the universe that they are very important to understand, especially these extremely cool ones,” lead author Abbigail Elms, a PhD student in the University of Warwick Department of Physics, said in a statement. “Formed from the oldest stars in our galaxy, cool white dwarfs provide information on the formation and evolution of planetary systems around the oldest stars in the Milky Way.”

The data from a star’s spectra can help astronomers determine how quickly metals sink into the star’s core. This allows them to look back in time to determine how abundant each of those metals were in the original planetary body.

“We’re finding the oldest stellar remnants in the Milky Way that are polluted by once Earth-like planets,” Elms added. “It’s amazing to think that this happened on the scale of ten billion years, and that those planets died way before the Earth was even formed.”