Termites work through wood faster when it’s hotter out

The new findings shed light on how significant termites could be in the carbon cycle as the climate shifts. 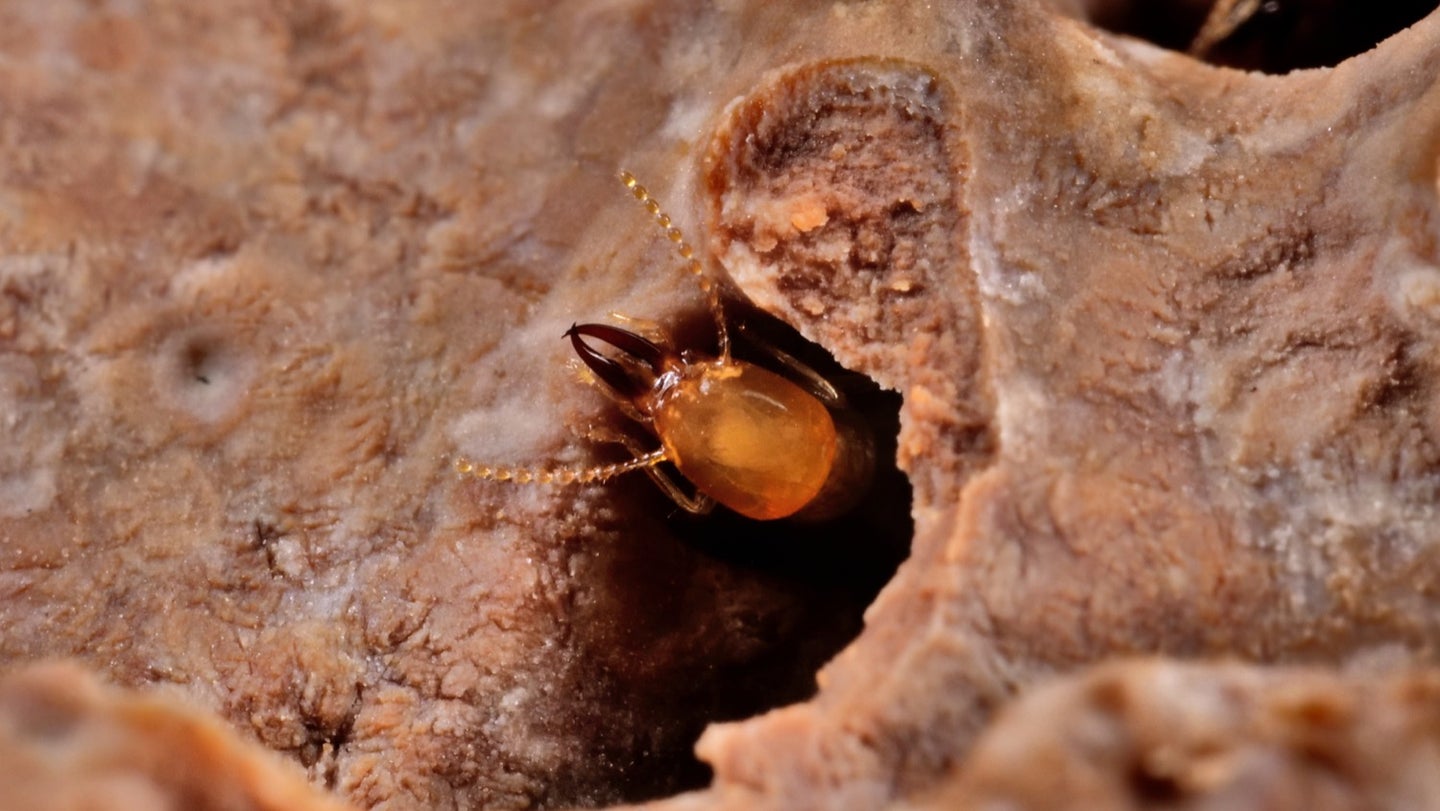 Termites are often thought of as pests, munching away at the foundations of homes and buildings. But in tropical forests, these master wood carvers are actually important decomposers. Termites help break down rotting wood, releasing the nutrients and carbon back into the soil and atmosphere. And now new findings from a large international effort spanning six continents showcases that the hotter it is, the faster termites whittle down decaying wood.

The rate of termite wood decomposition and consumption increases more than 6.8 times with every 10°C increase in temperature, a new study published Thursday in Science revealed. In comparison, microbial wood decay only doubles under the same rise in temperature. “It’s like if you go from, say, Boston to Miami, and if there’s a 10 degree [Celcius] increase in temperature, termites will respond by increasing their decomposition rates sevenfold,” says Amy Zanne, lead author of the new paper and biology professor at the University of Miami. “What it means is the wood is cycled out more quickly—you are releasing carbon more quickly.”

Fallen trees, stumps, branches, leaf litter and other plant debris are major sources of locked-up carbon—in total storing some 73 billion tons. This “deadwood” contributes to the carbon cycle, in which stored carbon atoms are released and reused back into the environment. The process promotes new plant growth and influences the planet’s temperature and climate by emitting carbon dioxide and methane into the atmosphere. There are many factors that cause wood to decay, from wildfire to solar radiation to microbes to fungi. “If we didn’t have decayers in the world, the world would be filled up with dead plants and animals,” explains Zanne, who specializes in decomposition and the carbon cycle.

But insects—such as termites—are also an important player in wood decay, says Zanne. Termites are temperature-sensitive creatures, increasing in abundance and diversity toward the equator. Unlike the pests that chew homes in more temperate regions, in the tropics, termites are more abundant and diverse. Certain species specialize on leaf litter, grasses, or dung. Another group of termites found in Asia and Africa farm a “garden” of white-rot fungus, Zanne explains. The fungus’ ability to mineralize the wood’s lignin—one of the hardest materials to break down in the world—paired with the termites’ metal-laced mandibles can easily decimate rotten wood.

To get a better grasp on these wood-devouring insects, Zanne teamed up with 108 coauthors across 133 sites around the world, including an equal representation of temperate and tropical regions in the northern and southern hemispheres. The researchers selected one type of wood, radiata pine also known as Monterey pine, that could be locally found and accessible at all the sites. Each participating group would dry out blocks of the wood, weigh them, and wrap them in a tight mesh that only microbes could slip through—half had holes cut in the bottom so termites could colonize. Researchers monitored the blocks for up to 48 months, looking out for fungi and the intricate tunnels and canyons created by termites. (A few exotic critters—including a tiny poisonous snake and a black widow spider—also snuck into the pine blocks, says Zanne.)

Clearing all that away, the teams dried out the wood and reweighed it to compare how much had been decomposed over time. Previous studies have shown that microbes have faster wood decay rates under warmer conditions, which was reflected in the new data collected from the wood blocks. But Zanne and her colleagues were surprised by how much more sensitive termites were to temperature—termites were four times more responsive than microbes.

“These were just astronomical numbers,” says Zanne. “They’re super sensitive to increases in temperature, meaning that with a small increase in temperature, they’re going to really jump how fast they’re cycling the carbon out of the wood.”

These new findings align with previous research. A 2021 study in Nature found that the rate of insect deadwood decay increased with rising temperatures, most notably in the tropics compared to cooler regions. But Zanne and the study authors noted that the termites were also sensitive to precipitation, but in an unanticipated way: While the termite decay was expectedly the greatest in tropical environments, the team saw they had a noticeable effect on decomposition in drier places like tropical savannahs and subtropical deserts.

The study highlights important trends about the carbon cycle under a changing climate, says Kenneth Noll, a professor emeritus of microbiology at the University of Connecticut who was not involved in the research. “I found the study interesting because it aims to plug a rather large hole in our knowledge about the rate of decomposition of deadwood,” Noll wrote to PopSci in an email. “The rate of release of this stored carbon back into the atmosphere will undoubtedly increase as the planet warms, so we must have better measures of this to have better climate models.”

As climate change is expected to shift environments towards more tropical conditions, it could create more suitable habitat for termites and cause populations to expand. This could increase their role as wood decomposers in the carbon cycle, Zanne and the study authors suggest. However, Noll notes that global temperature rates are generally expected to rise only about two-fold, which would mean that the increase in termite decomposition globally would not go up nearly seven-fold so “the implications could be relatively small.” What remains to be seen, he adds, is how termite communities in temperate and boreal regions would respond to climate change, where temperature increases will be higher.

He also noted that it would be worthwhile to investigate termites as a source of methane—a powerful greenhouse gas. Zanne agrees. “Termites are like little cows, and they are releasing methane” through their digestive systems, she says. “We also think that they have the potential to alter how much is going up as methane versus getting locked in soil. So they might alter how carbon is leaving the wood.”

While scientists are working on unpacking how climate change will displace various organisms in the future, Zanne says it’s just as important to understand how it will influence carbon cycling.

It’s important to consider “the role of some of these little things in the world, such as the microbes and termites, that we often can’t see,” she says. “They’re incredibly important for maintaining and affecting the Earth that we co-inhabit with them.”