These worms produce milk, but only when they kick the bucket

This makes breastfeeding look like a walk in the park. 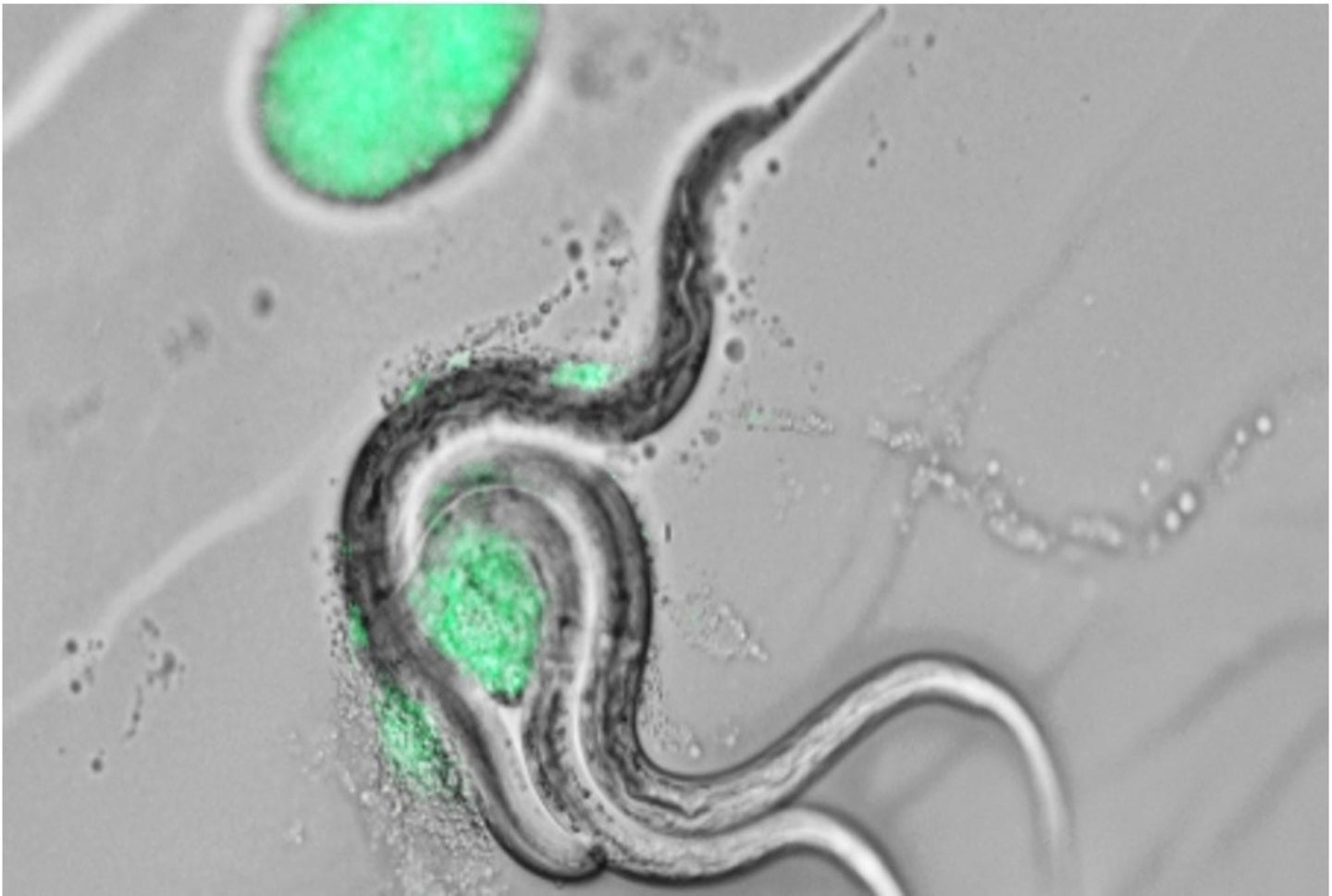 Fluorescent microscopy allows us to see one-millimeter roundworms, the leftmost one expelling milk through its vulva so its offspring, lower right, can eat.
SHARE

In a world of myriad milks, from cow to oat, we now have worm milk. This is no dairy substitute for human consumption, but rather a substance that worm parents secrete to their offspring in an act of reproductive death, or sacrificing their life to nurture children. For years researchers have observed worms produce this goo and perish, but now they understand why: It’s milk—well, it used to be the worm’s intestines secreted through the vulva—that feeds offspring. Further, this discovery has an intriguing connection to past research done on C. elegans that increased their lifespan by tenfold.

The study, published last week in the journal Nature Communications, examines this self-destructive, lactation-like process in C. elegans, one-millimeter transparent roundworms.  The researchers, all from University College London’s Institute of Healthy Aging, studied how the known process of venting one’s intestines is associated with chemical pathways that control the aging process.

“The real interesting side of it is that this milk is being produced at a cost,” says Carina Kern, the study’s first author. That cost is that these nematodes hemorrhage their intestines, now a yolky milk, through the vulva, and then they expire so their children may live.

[Related: These animal moms go to extreme lengths to feed their babies.]

Worms are hermaphrodites, meaning they possess male and female anatomy. So a worm can fertilize itself, but it runs out of sperm before it runs out of eggs. Once it runs out of sperm, it will expel its remaining unfertilized eggs and self-destruct since it can’t reproduce anymore. These worms in particular are semelparous organisms, meaning they reproduce only once (unlike humans and other mammals, which can reproduce multiple times in a lifetime). Many semelparous organisms also experience reproductive death, like Pacific salmon and the marsupial antechinus.

One of the most interesting aspects of this study is the implication with aging. Kern says that starting in the 1980s, researchers in aging studies discovered that suppressing the insulin pathway in C. elegans increased the worms’ lifespan up to tenfold. That gene happens to also control this reproductive death. So, when the gene for creating this milk-yolk is switched off, the parent worm doesn’t produce it, and therefore doesn’t perish immediately after.

Kern says the nematodes are healthier and longer lived with this pathway suppressed, considering they can no longer void their guts. So, the connection of interest is how other pathways, potentially in humans, could stop gruesome biological processes and increase lifespan.

By switching off this secretion, the offspring won’t suffer, however. The milk is more like a last-ditch effort when food is limited. Worms subsist on bacteria, and when the microbes are in short supply, the animals produce this yolk-milk. In a lab environment where nematodes don’t need to compete for nutrients, Kern says last-ditch effort is less necessary. The offspring can survive as long as there’s enough nutrients to go around.

[Related: This flatworm injects itself in the head with sperm.]

While human parents certainly don’t literally give up their lives for their offspring, a curiously similar thing occurs in breastfeeding. When a parent is breastfeeding, their bones lose calcium so that the baby can receive it through breastmilk, temporarily weakening the bones. However, this transient calcium loss is eventually restored—sometimes to higher levels than before.

Kern is interested in learning more about the pathways by which this milk production occurs. The pathway in worms is called insulin-like growth factor signaling, and once that pathway is suppressed, both milk production stops and the lifespan extends.

Worm milk will not be coming to a supermarket or coffee shop near you, but further research of it could eventually tell us more about human aging, and how to increase longevity.