Scientists discover how a cell may cheat its own death

Cells may back out of self-destruction, posing one way they can manage their own functions. 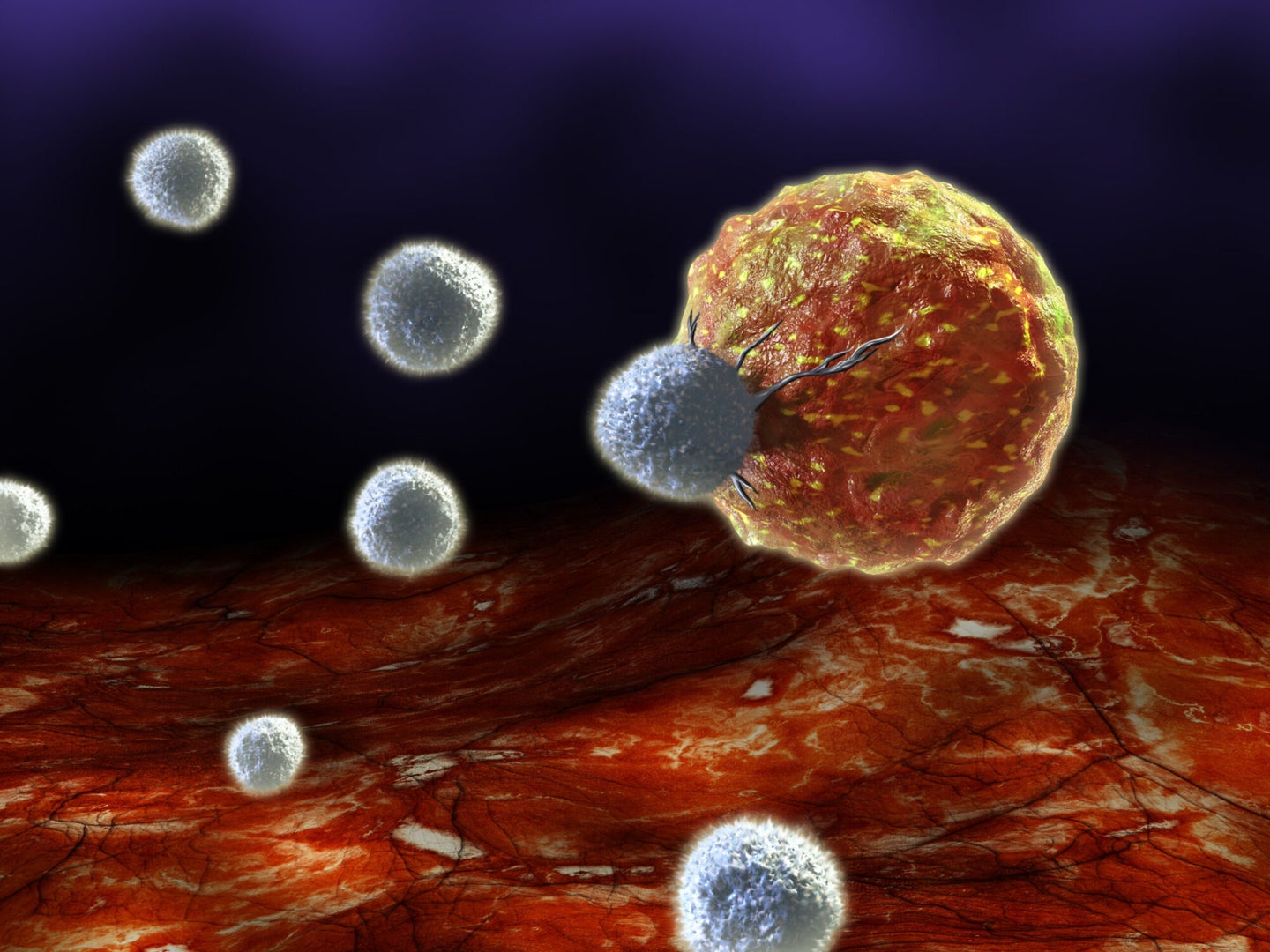 A digital illustration of an immune cell attacking a cancer cell. When battling an infection or a disease, immune cells may strategically pop to release signalling chemicals, but this process can be reversed, researchers found. Deposit Photos
SHARE

Cells can die in many ways, but one fate is particularly grisly. Pyroptosis occurs when a cell dies by detonating, typically in response to an infection. In a fiery swan song, a pyroptotic cell sacrifices itself to flood surviving compatriots with its last supply of danger-signaling chemicals called cytokines. The cell’s death is quick and messy, but it’s for the greater good.

“It happens quite abruptly,” says Gary Mo, a bioengineer at the University of Illinois, Chicago. “The cells will literally pop.”

Scientists had previously thought that pyroptosis is a one-way street—once set in motion, the decision can’t be reversed. In a recent study published in the journal Nature Communications, Mo and his team found that a cell has an inbuilt mechanism to revoke pyroptosis, allowing it to die another day. The insights from the discoveries could clue researchers in on how pyroptosis can be regulated, be it to kill off cancer cells in a patient, or to suppress the phenomenon in immune cells and prevent the onset of cytokine storms when the body battles a particularly gnarly infection.

When a cell receives the external command to undergo pyroptosis, proteins inside the cell called gasdermins stir awake. These molecules-on-a-mission will embed themselves in the cell membrane and open up holes, which Mo likens to putting windows in the bottom hull of a ship to hasten its sinking. The membrane loses structural integrity, and like a downing ship, it can no longer prevent all kinds of substances from infiltrating from the outside environment. The cell eventually bursts when it becomes overfilled with water, just as would an overpressurized balloon.

“You can imagine that this is a dangerous process,” says Mo. So, cells have evolved a way to tamper with their ill fate as a way to regulate the consequences. “It’s probably a good idea to have a pause button,” Mo says. He explains that it’s as if a cell is giving itself an out and asking, “‘do you really want to do this?'”

Pyroptosis is a complicated process involving many moving parts. Mo’s team simplified the mechanism by engineering light-responsive gasdermins for their benchtop reenactment. Analyzing structurally compromised pyroptotic cells, the team measured the influx of calcium ions—an obvious choice to the researchers, as the calcium concentration is usually higher outside the cell—and were astonished to observe an abrupt halt in the incoming ion flow, indicating that the pores had sealed.

Contrary to common knowledge, says Mo, a pore isn’t static. He theorizes that a cell might pick up on the sudden spike in calcium ions as a signal to backpedal on pyroptosis. In response, the cell alters the composition of its leaky walls by changing how its fatty-molecule constituents pack along the membrane, “and all of a sudden, it’s like the hull of your ship becomes stronger,” says Mo. “And [the pore] just shuts itself.”

The cells’ ability to close protein-punched pores comes as a surprise, says Isabella Rauch, an immunologist at the Oregon Health and Science University, who wasn’t involved in the study. The observed cascade of effects kicking in right after a hole opens sheds light on the intricacies of pyroptosis, and that gasdermin proteins aren’t the only gatekeepers of cell fate. The study reveals that “there is more than just the activation of the pore-forming proteins that contributes to what’s actually happening to the cell,” says Rauch.

It’s a tight balancing act, of course—a cell’s push for pyroptosis versus the competing drive for survival. Mo notes that a cell will eventually succumb to its demise when pores open up faster than they can slam shut. A cell may cheat death, but not forever.