An international blue carbon wave is on the way. In the lush mangroves of Cispatá, Colombia, where Carribean waters meet tangles of twisted tree roots, a first-of-its-kind conservation project is now underway. Coastal ecosystems like Cispatá can sequester massive amounts of carbon—up to 10 times more than tree-filled forests. That’s why a whole team of organizations has come together to orchestrate the “sale” of the mangrove’s preservation as a form of new, “blue” carbon credits. These above- and below-ground carbon stores will soon be sold as Verified Carbon Units (VCU’s) on the global market.

This is the first such blue carbon project registered by Verra, an organization that sets standards for and approves VCU projects. It’s the result of collaboration between nonprofit Conservation International and Colombia’s INVEMAR Research Institute, the Omacha Foundation, and two national environmental authorities, CVS and CARSUCR.

Blue carbon is becoming a buzzword, and it may not be long before these carbon crediting programs start popping up in coastal ecosystems around the globe. Though threatened by human activities and development, people are paying increased attention to the protection and restoration of these ecosystems, which naturally sequester massive amounts of carbon. The projects have major potential for offsetting pollution and reaching net-neutral carbon goals.

“It’s exciting because this is the first blue carbon conservation project that we’ve had, but it almost seems like there’s about to be an explosion of new projects,” says Amy Schmid, manager for natural climate solutions development at Verra. “There’s a lot that are in early stages of development, in most regions of the world.”

The many functions and benefits of blue carbon

Blue carbon refers to coastal wetlands, mangroves, and tidal marsh seagrasses that contain rich stores of carbon—substantially more than terrestrial forests—and exist on every continent but Antarctica. While some scientists debate the merit of including living animals like whales and other fish in their definition of blue carbon, The Nature Conservancy and other organizations focus on entities that stay within a country’s jurisdiction, where policy can be made to protect and restore them.

Between 80 and 90 percent of the carbon in these ecosystems is found in the soil, while above-ground biomass stores can differ greatly between mangroves and other systems like salt marshes. These stores are so rich because in addition to the biomass of the ecosystem itself, carbon flows into these areas from both the ocean and nearby freshwater sources.

Wetland soils can also emit methane and sometimes nitrous oxide, which has to be taken into account when measuring carbon stocks. But this is also mitigated by the ecosystem’s salinity, and the overall storage is much greater than these byproducts.

They also serve as a coastline buffer, protecting against storms and floods, an increasingly important function as climate change makes these events more extreme. After the catastrophic Category 5 Hurricane Dorian hit the Bahamas in 2019, for example, water receded from areas with mangrove forests about a week sooner than areas without mangroves.

“If you look at the cost of recovering for some of those natural disasters versus the cost of restoring something that will maintain itself over time, the cost-benefit is very clear,” says Jennifer Howard, senior director of the blue carbon program at Conservation International. “You just have to have a longer viewpoint.” 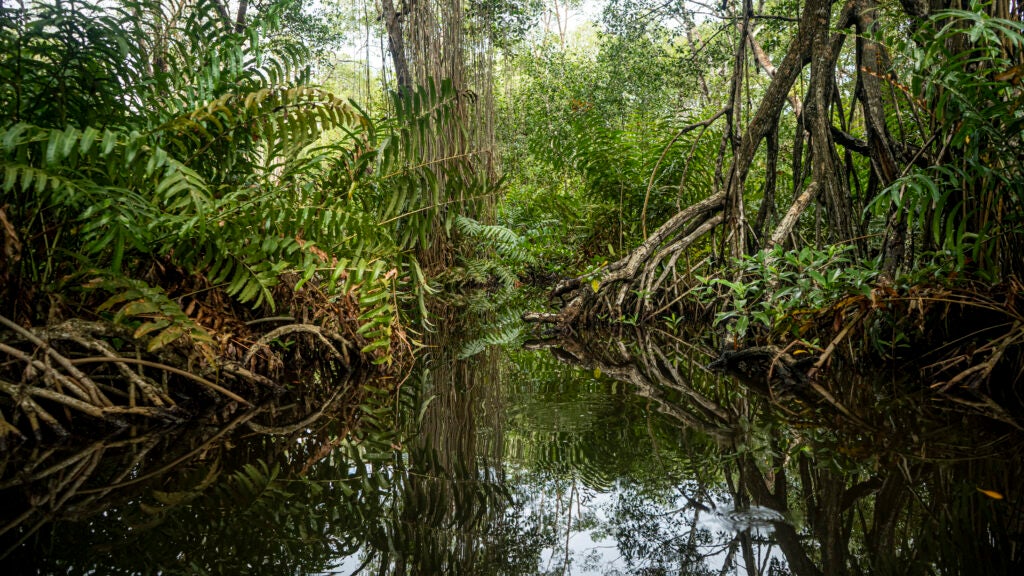 The mangroves of Cispatá, Colombia.

Beyond their carbon sequestration powers, coastal ecosystems provide essential services to the communities that live on their banks. Millions of people make their livelihoods in mangroves and other blue carbon ecosystems, fishing and harvesting in these highly biologically diverse areas. Many fish caught off-shore spend at least a part of their life cycle in the tidal ecosystem, affecting the entire food chain.

However, the current loss rates are likely lower because most of the world’s prime mangroves have been sacrificed  to development. Now only more remote ecosystems remain, rather than any particular success of conservation efforts, according to Landis. Seagrass and tidal marsh ecosystems are estimated to have a loss rate of about 1 percent, although this relies on self-reported government data rather than more objective satellite imagery.

This loss is primarily driven by coastal development of beachfront property—about 40 percent of the world’s population lives on the coast. The destruction of mangroves for shrimp and milkfish (and recently rice and palm oil) aquaculture ponds is common as well, primarily in Southeast Asia. Seagrasses are also threatened by pollutants and invasive species. Wasting disease, a pathogen, was estimated to have killed off 90 percent of the eelgrass in the Atlantic Ocean in the 1930s, and although the species made a moderate recovery, these systems face ongoing threats.

Beyond clearcutting and direct destruction, the hydrology of these systems can be damaged through infrastructure development, sometimes far from the mangroves themselves. For example, a road built inland can unexpectedly cut off the flow of freshwater to the coast and unbalance salinity levels, throwing off the whole system. Cuba lost all their mangroves on one coast of the island this way, Landis says.

To combat these threats, organizations on a local, state, and international level are taking on coastal conservation and restoration projects. And each level of engagement is essential.

“You need the community to recognize the value of their mangrove system, to be pushing for conserving it,” Landis says. “Then you need the local government understanding the value, you need the state, or the country to understand the value. And you need the pressure from the global [community], so it really has to be top down and bottom up at the same time, or it’s not going to work.”

For governments, these programs can mean fulfilling climate mitigation and biological diversity pledges, as well as gaining the economic benefits from selling carbon offsets. Howard says Conservation International is seeing huge demand from governments around the world that want to learn more about blue carbon, training to measure and monitor their stores, and purchasing or developing carbon credits.

“There’s a massive amount of projects in the works with a lot of momentum behind them,” Howard says. “I think we’re really seeing just the start of this blue carbon wave.”

But for local communities, different incentives must be considered. In areas that might have a government-protected tropical forest inland and marine-protected areas on the ocean, small areas of coastline may be the only places left for fishing, agricultural work, or even just living.

“You’re telling them, ‘No, no, no, you can’t tear down anything that’s on your coastline where you’re living,’” Landis says. “They have kids to feed, they have things that they just need as basic rights. And so you have to think about, how can you help them? And how can you use mangroves to help them? How can you find the most sustainable livelihoods for them? The pandemic has shown you can’t just say ‘ecotourism’ and hope everything’s okay.”

That’s why gaining community buy-in is essential for the success of these projects. Developed collaboratively by a number of nonprofits, Climate, Community & Biodiversity (CCB) standards that provide safeguards for outreach and input from local communities are one mechanism to ensure land management projects obtain consent and respect community rights—but they are not required across the board.

Another key to the success of conservation and restoration projects is using the correct methods and ensuring long-term sustainability: making sure the ecosystems still physically exist and the needs of the entire communities around them are met.

Restoring lost mangroves is more complicated than handing someone a bag of seeds and telling them to go spread them on a beach. Almost 80 percent of mangrove restoration projects fail, often because the wrong methodologies are employed, says Landis. A mix of natural restoration and planting is key for growing back lost flora. Carbon financing, like VCU’s, can ensure restoration sites can be funded for at least the next 30 years, the expected timeline of many of the voluntary carbon markets according to Landis. 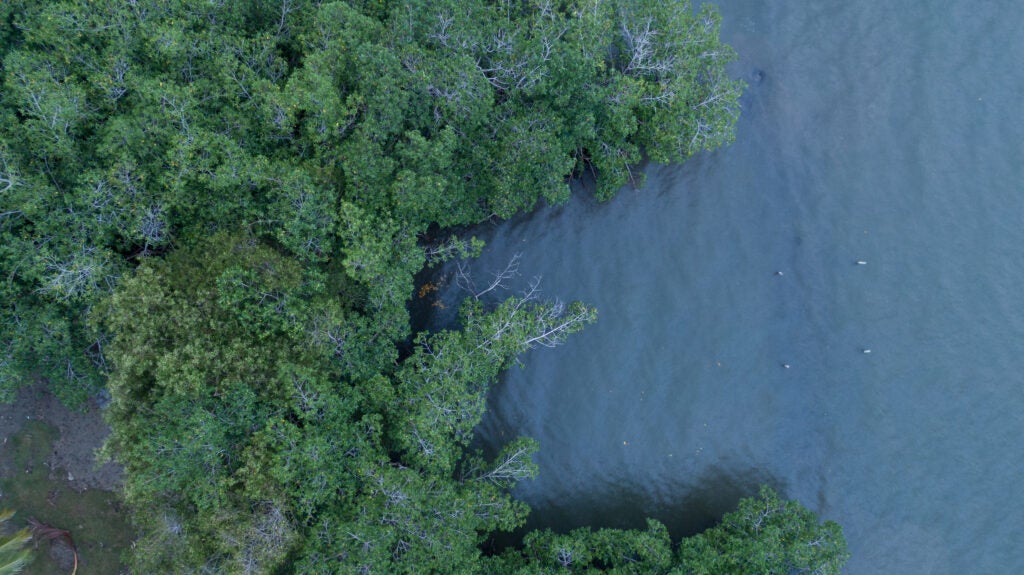 The carbon market is still being developed, both in the US and internationally. Each country’s system will have to balance government priorities, what initiatives such as carbon taxes are already in place, and embassy commitments to agreements like the Paris Climate Accords.

How the economic benefits of the credits are distributed to the community also differs on a case-by-case basis. Project leaders could choose to use that money to fund activities that combat deforestation and habitat degradation, or that revenue could be directly reinvested in local communities.

“It’s a big puzzle piece, or a complicated word problem from math class,” Howard says. “We really have to understand all the moving pieces and all the priorities of all the different stakeholders, and figure out the best way to piece it all together, such that the ultimate end goal is still conservation and restoration of the systems and driving investment in those activities that conserve and restore those systems.”