While the developed world wrestles with curbing carbon emissions from luxuries like personal automobiles and the multi-megawatt power plants that... 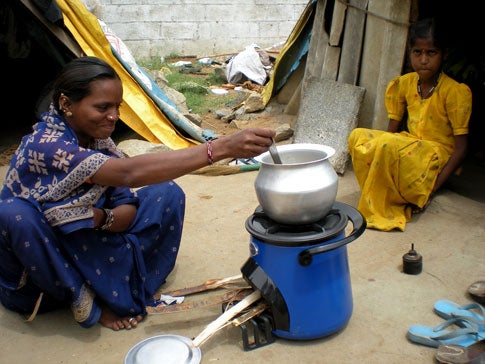 Envirofit's Clean Cookstove, for use in the developing world, cuts deadly smoke and carbon-monoxide emissions by 80 percent.
SHARE

While the developed world wrestles with curbing carbon emissions from luxuries like personal automobiles and the multi-megawatt power plants that keep homes and offices at a comfortable 72 degrees, Secretary of State Hillary Clinton is engineering an ambitious bottom-up approach to reduce emissions in the third world: providing cleaner cooking stoves. Clinton aims to introduce 100 million clean stoves to poor people the world over by 2020.

With two military entanglements cooking up trouble in volatile parts of the world, the threat of international terrorism omnipresent, and the budget stretched as thin as a busted economy can stretch it, it might seem like an unlikely time for worldwide kitchen renovations. But cooking smoke is a bigger threat than it seems. Aside from belching tons of black carbon into the atmosphere daily, cooking smoke produced in poorly ventilated areas is estimated to shorten the lives of 1.9 million people annually.

These stoves generally run on wood (or, worse, rubbish) and are the go-to source of heat and food preparation for some 3 billion people every single day. The constant exposure to smoke puts people – mostly women – at risk for lung diseases, eye disease, and cancer, as well as other less obvious but equally real risks; foraging for fuel presents a particular security risk to women in the third world, especially in unstable areas where rule of law is scarce.

Clean cook stoves would run on biomass, gas, or solar power. They employ chimneys and clean-burning technology where applicable, and they could significantly cut down on emissions of black carbon in the developing world, 20 percent of which comes from cooking. The impact of black carbon – pure carbon produced mostly by incomplete burning of fossil fuels – on climate change is debatable, but at the more alarmist end of things it’s estimated to be half as harmful as CO2. It’s particularly problematic in Asia, where wood-burning cook stoves are pervasive and other factors compound the problem.

Secretary Clinton’s effort marks the first such effort to tackle the problem globally, though it aims to build off national programs already underway in places like Peru and India. And it’s the kind of international aid that’s hard to argue with – minimally expensive ($50 million from the U.S., which in the grand scheme of things is a pittance over five years), with the goal of helping hundreds of millions of people directly and pretty much everyone indirectly, through access to better technology.

Want to see what clean cooking tech looks like? We were singing its praises back in 2008. Check it out here.