Crabs And Lobsters Probably Do Feel Pain, According To New Experiments

The jury's still out, but if there's a ghost of crustaceans past, it's definitely coming back to haunt us. 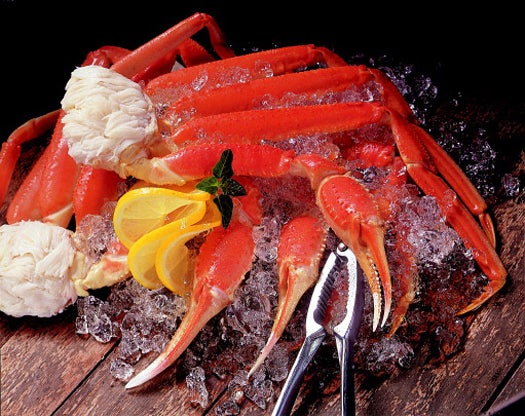 Whether or not crustaceans like crabs and lobsters can feel pain remains a hot-button issue. After all, humans regularly do things like boil them alive, a process that leaves some people feeling a bit unsettled as their dinner rattles around in the pot in what sure sounds like death throes.

According to Robert Elwood, a professor of animal behavior at Queen’s University in Belfast, Northern Ireland, the evidence strongly suggests crustaceans do actually experience pain, contrary to some previous work. Elwood has been conducting a plethora of experiments probing whether or not crustaceans can actually feel pain, or whether they simply respond to a stimulus like an electric shock reflexively, and announced the finding at the Behavior 2013 conference in Newcastle, UK today.

Elwood and his colleagues have experimented to see whether crabs can learn from electric shocks. In one experiment, crabs were more likely to relocate when they received electric shocks inside their shelter than when they did not receive any shocks. In another, hermit crabs shocked while inside a type of shell they tend to prefer were quicker to move into new shells when presented with the opportunity.

Yet as Zen Faulkes, a University of Texas-Pan American invertebrate neuroethologist, pointed out in a blog earlier this year, it’s hard to determine if electric shocks are painful for crustaceans in the same way they are for us. Crabs have been known to rip off their own injured limbs, for example, which would be almost unthinkably painful for a human. Electric shocks also provide a completely different kind of stimulus than being immersed in boiling water, so there’s a possibility the results might not translate to that seemingly cruel action.

It does seem to call into question the Crustastun, a supposedly trauma-free, compassionate method of knocking off crustaceans within a few seconds–via electrocution, which in light of Elwood’s research doesn’t seem so trauma-free after all. Zen, for his part, suggests using ice as an anesthetic for your soon-to-be-delicious meal.

Elwood conceded that “assessing pain is difficult, even within humans,” according to Nature, but told conference attendees there is “clear, long-term motivational change [in these experiments] that is entirely consistent with the idea of pain.” From his research, he concludes that crustaceans should be protected from the kind of “extreme procedures” they are currently subjected to — things we wouldn’t do to mice, such as lobsters having their legs removed while still alive or crabs being kept tightly bound for days before being sold.