FYI: Why Does Lobster Turn Red When You Cook It? 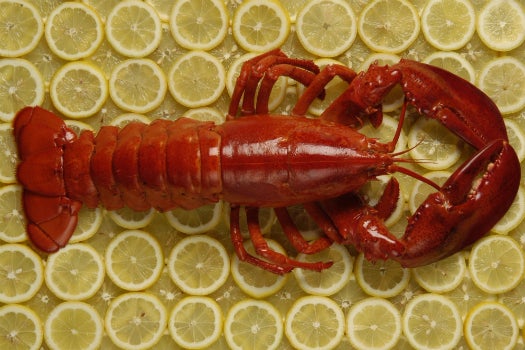 Just a week from now, thousands of people will trek to Rockland, Maine for a festival devoted entirely to the eating of a creature once thought only worthy of “poverty food” and fertilizer. The lobster festival approacheth. In honor of the occasion, a reminder of all that makes the lobster beautiful: that attractive red color it turns when ready to be devoured.

Though natural color variations due to diet and genetics do occur, the shelled seafood you crack open at Red Lobster probably didn’t start off that deep orange-red color we’ve come to associate with crustacean snacks. Live American lobsters usually look kind of muddy brown, even though their shells contain astaxanthin, a carotenoid from the same family of organic pigments that includes beta-carotene, the source of carrots’ bright hue. Astaxanthin is also responsible for the pink coloring of flamingos, salmon, krill, shrimp and crabs.

Free astaxanthin appears red, but when it binds to proteins in the lobster’s shell, the bonds twist the pigment, changing its color. Depending on the type of protein it bonds to, there’s either what’s called a bathochromic shift, which turns the pigment blue, or a hyspochromic shift, to yellow. When you’re looking at a lobster, you’re seeing light reflecting through different layers of free and bonded astaxanthin–a lot of colors mixed together, hence the muddy brown.

Adult lobsters’ size keeps them from getting eaten by most other sea creatures, but since it takes them 7 years to grow to their full stature, a little bit of camouflage is a survival necessity in the interim. The nondescript color helps them blend into their surroundings at the bottom of the ocean. “They really need to have this cryptic lifestyle,” says Michael Tlusty, the director of research at Boston’s New England Aquarium.

“What happens when you cook it, you denature the protein through the heat, and it releases the pigment,” he explains. The resulting free astaxanthin makes the shell red all the way through. The same process applies to crabs and shrimp.

In lobsters, more unusual colors are possible, though not as common. Some lobsters genetically look a blue, for instance. Different foods can change a lobster’s color, as well: A diet devoid of astaxanthin (usually ingested via algae, seaweed or shrimp) turns a lobster completely white.

A synthetic version of astaxanthin is used as a food supplement for farm-raised seafood and eggs to improve their color. Humans, too, can benefit: It’s a powerful antioxidant with anti-cancer properties that some studies have shown can improve wrinkles, protect against UV light, reduce inflammation and potentially treat cardiovascular disease.