And how does tattoo removal work? 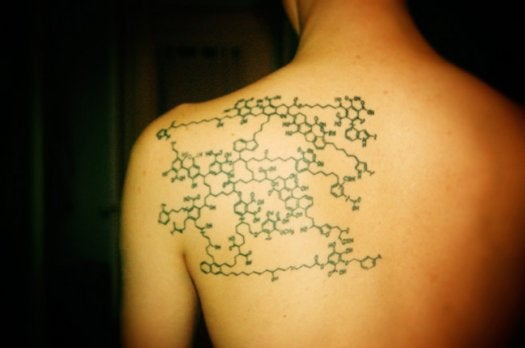 It’s all about the particles in the tattoo ink’s pigment says Dr. Anne Laumann, MBChB, a professor of dermatology at Northwestern University.

Tattoo application uses a mechanized needle to puncture the skin and inject ink into the dermis or second layer of skin just below the epidermis. Since the process involves damaging the skin, the body responds with white blood cells which attempt to absorb the foreign particles and dispose of them in the blood stream.

“The reason pigment stays there is because the pigment particles are too big to be eaten by the white cells, so they just sit there,” Laumann says.

Pigment particles are too big to be eaten by white cells, so they just sit there.Tattoos have become increasingly popular in recent years. According to a 2010 Pew Research Report, approximately 40 percent of Americans between the ages of 18 and 29 have at least one tattoo.

The problem with tattoos is exactly what makes them so appealing–their permanency. “If you have the name of your boyfriend on there and then you marry somebody else, that’s a problem,” Laumann says.

Tattoos also tend to become problematic with age. Ink can become blurred if injected too deeply into the skin, causing the pigment to migrate beyond the intended area. Fading and distortion due to changes in body shape are also common problems with tattoos. Permanent makeup–or tattoos that resemble eyeliner or other makeup–is a prime example of how these problems can lead to dissatisfaction years after the ink is applied because skin sags and changes shape with age.

If you have the name of your boyfriend on there and then you marry somebody else, that’s a problem.”The problem with that is as you get older the shape of the fold of the skin changes,” Laumann says. “So not only does it bleed a bit because the pigment moves gradually over time and so those will tend to become sort of smoky edges, but also the whole line might become a little distorted over the years.”

When a tattoo is no longer desirable, whether it’s faded or causing a bad case of buyer’s regret, you can burn it or cut it out–but the safest and most effective method is a laser treatment.

To remove a tattoo using a laser, the light beam zeroes in on a single color (in most cases black) and breaks up the pigments’ particles until they are small enough to be carried away by white blood cells. The process is extensive, usually requiring many sessions depending upon the size and color of the tattoo. Removal may also cause scarring.

“The big problem with tattoo removal is that it’s really hard to get the whole tattoo out,” Laumann says. “Using a laser often leaves a coloration afterward, I mean it’s really hard. People get frustrated because it takes them so long and laser treatments are expensive.”

So maybe you should just get your mom a nice card instead of using ink to proclaim your love.

Ask Us Anything
art