FYI: Are People Born With A Tolerance For Spicy Food?

Or is it an acquired taste? 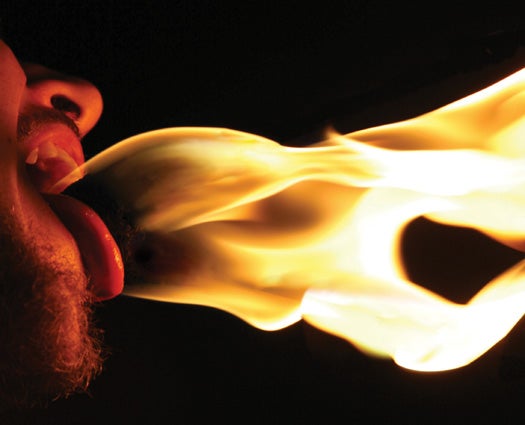 Spice tolerance: Is it nature or nurture? As with most things, it’s a little bit of both.

To really understand how spice tolerance works, you have to know the basics of taste perception. “What people call taste is actually flavor,” explains Dr. Bruce Bryant of the Monell Chemical Senses Center. Flavor has three components: taste, olfactory sense, and trigeminal sense. The various tastes that the body senses are sweet, sour, salty, bitter, umami, and possibly fattiness.

These work in conjunction with your olfactory senses to produce the sensations people mistake for one-dimensional taste. “A fruit is sweet and/or sour, but the inherent fruitiness is your nose smelling all the compounds,” Bryant says. “It’s your nose that allows you to tell the difference between eating an apple and a pear.”

What people call taste is actually flavor.
Your trigeminal system controls spice sensation. The system detects pain and irritation through nerve endings that are sensitive to touch, temperature, and pain. For instance, you have your trigeminal system to thank when you sense a rock in your food and know to spit it out. Plants have the ability to activate trigeminal receptors: Mint stimulates cool-sensitive nerves, while capsaicin, the compound in spicy food, triggers receptors in pain neurons.

Scientists speculate that some people are born with pain receptors that are less sensitive to capsaicin’s sting, but no thorough research exists on the subject as of yet. However, researchers know that exposing children to spicy food at a young age can desensitize nerve endings.

According to Bryant, Mexican parents give their children packets of sugar mixed with red chili powder, which they eat straight up, in order to build their spice tolerance. “We assume that continued exposure at a young age causes nerve endings to die off,” Bryant says.

But then how do you account for spice-lovers who started eating these foods at an older age?

To answer this question, researchers at Penn State University investigated the link between personality traits and affinity for spicy food. They found that “sensation seekers,” or people who enjoyed the thrills of roller coasters, gambling, and meeting new people, were generally more enthusiastic about piquant dishes. Others in the field criticize the study’s predominantly Caucasian test group. However, the researchers argue that homogeneity was essential to observing personality correlations.

Continued exposure to spicy food at a young age causes nerve endings to die off.
“We looked at a population that didn’t grow up eating spicy food but still likes it,” says Dr. John E. Hayes, Assistant Professor of Food Science at Penn State and the head researcher on the study. “If you were looking at a population where everyone eats spicy food, you might not find these traits, and they might not be applicable.”

Regardless of where you stand on the sensation-seeking scale, if you like your food spicy, you’re getting a thrill from what is technically a painful sensation. Yes, you are fully entitled to feel more macho right now. But if you try to show off and end up surpassing your spice tolerance, try chewing on some mint leaves–it will activate your cooling receptors (so you’ll stop sweating) and freshen your breath at the same time.

Ask Us Anything
food
FYIs