Replace Your Lights With These Genetically Engineered Glow-Plants 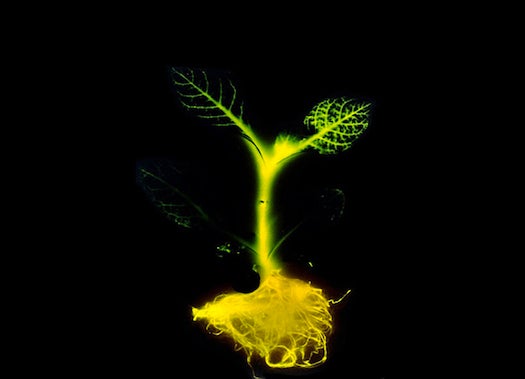 Light bulbs are so 19th century. Why not genetically engineer yourself a glowing plant instead?

A team of scientists on Kickstarter is asking for donations to make it happen. The group has set up a DIY lab, where they’re selecting the genes of bioluminescent bacteria, which turn a radioactive green in the dark. After that, they want to use software called Genome Compiler to create DNA that a plant can “read.” With funding, the group says, they’ll synthesize the bacteria with glowing genes and insert them into plants, which will turn into the alien-like thing you see in the video here. We’ve seen a lamp that’s made out of glowing bacteria, but putting the bacteria in a plant is something new.

The project’s already destroyed its funding goal of $65,000: backers have so far pledged more than $200,000, and there are still 34 days left to go. At $400,000, they’ll start offering glowing roses, for the loved one in your life who’s into genetically engineered stuff.