Zap Away Would-Be Attackers With This 3800kv Anti-Rape Bra 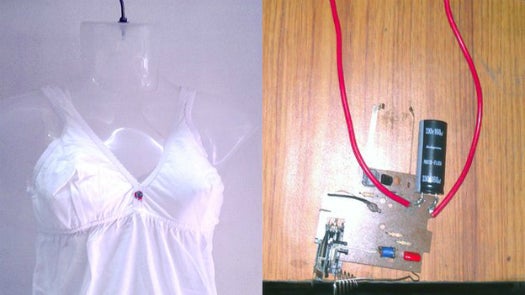 In the wake of a highly publicized series of brutal rapes in India, a group of engineering students devised a way to help women deter sexual assault: Make their underwear a weapon.

Manisha Mohan, a 20-year-old student at SRM University in Chennai, developed an undergarment called the “Society Harnessing Equipment,” or SHE, with two of her friends in response to the December gang rape of a 23-year-old student in Delhi.

The white nightgown’s bra area is lined with pressure sensors calibrated to differentiate between more violent actions like squeezing, pinching or grabbing as opposed to say, hugging. Women can switch the garment on when they feel they might be unsafe. If the pressure sensor is activated, SHE sends a 3800kv electric shock through the garment, up to 82 times. The wearer is insulated from the shock by a polymer lining on the inner side.

It’s also designed to alert others of the danger by sending a text message to a family member or friend and to the police with the wearer’s GPS location.

The team is still working out a few kinks, like figuring out how to make it machine washable, and Mohan told the BBC they’d like to make the electronics smaller and link them to a smartphone app through Bluetooth.

“My vision is to see every women [sic] walking confidently on the streets in all parts of the world, even at odd hours,” Mohan told the BBC.