The tiny single-cell plants eat, reproduce, and then sweat fuel 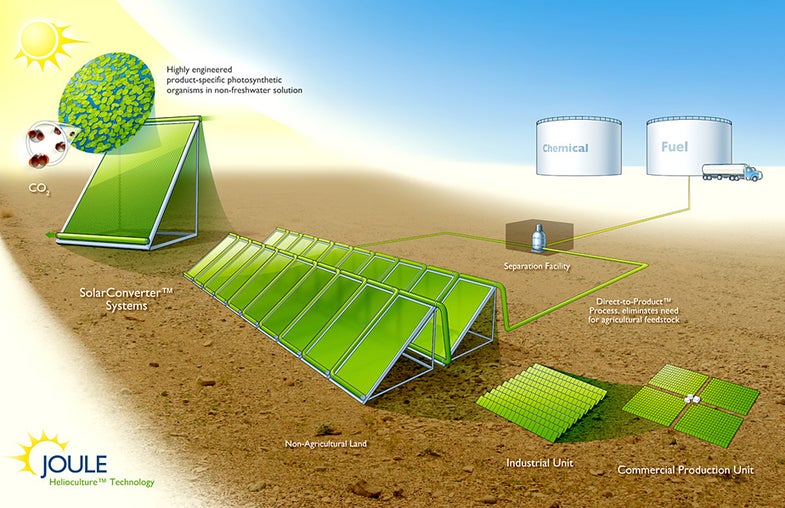 Tiny organisms such as algae offer great promise for a clean energy future by creating biofuels or even hydrogen, if only scientists can figure out how to use them in a cost-efficient way. A startup named Joule Unlimited has hit upon a possible solution, with a genetically tailored organism that sweats out its fuel and lives on to continue making more, New York Times reports. The company broke ground recently on a Texas pilot plant that will house the single-cell plant organisms in flat structures resembling solar panels facing the sun.

Water flowing through the panels will carry off the hydrocarbon fuel for separation. Hydrocarbon oils such as diesel produced by the organisms separate from water and make the gathering easy, while distilling technology already exists for separating out the ethanol from water. Workers will regularly flush the system every eight weeks and start with fresh batches.

The modified organisms can convert sunlight and carbon dioxide into ethanol or diesel fuel, and are supposedly based on similar types found in nature.

Joule Unlimited hopes to eventually put its operation near a coal or natural gas power plant, so that it can use the carbon dioxide captured by said plant. The company has already raised $30 million in second-round financing, and predicts that it could create 25,000 gallons of ethanol per acre each year — much higher than production from other biomass sources.

Considering the debate over how corn-derived ethanol competes with growing corn to support livestock and humans, this approach sounds a good deal more promising. It’s also an intriguingly different approach from breaking down the tough cellulose walls of plants to create biofuels, which has represented the long-term goal for researchers. If Joule Unlimited can deliver on its promises, we envision that it should be able to carve out its own niche among the array of clean energy solutions jostling for position.