And more disturbing stats from a biennial report on women and minorities in science and engineering. Though it's not all bad! 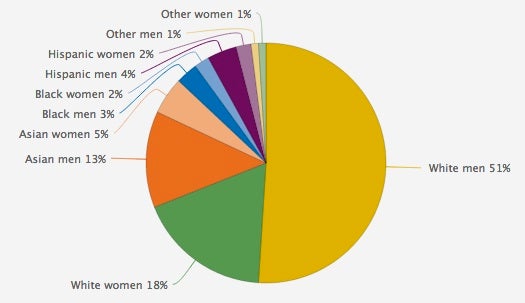 You probably already know that women and certain minorities are underrepresented in science and engineering in the U.S. But a recent report from the the National Science Foundation shows just how pronounced that gap is.

The report comes out every two years, and it tracks women, minorities, and people with disabilities in science and engineering. The latest report uses figures from 2010, the most recent year for which data was available. The highlights include trends that are both expected and unexpected:

By the way, Asians aren’t considered an underrepresented race in math and science. In 2010, 18 percent of U.S. scientists and engineers were Asian, while Asians represented only 4.7 percent of the U.S. population. The National Science Foundation counts black, Hispanic and American Indian people as underrepresented minorities in science. 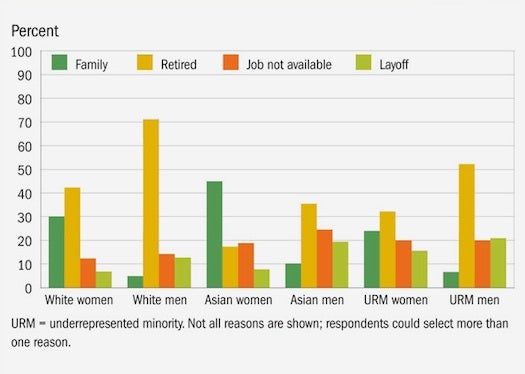 Reasons For Not Working Among Scientists And Engineers, 2010

The reasons for unemployment vary between different races and sexes of scientists.

The majority of working scientists and engineers (51 percent) are white men, with the next-largest groups being white women (18 percent) and Asian men (13 percent). One promising detail: these figures probably won’t stay that way forever. Women and underrepresented minorities are earning greater and greater shares of math and science degrees every year, it’s just that the job market, which includes scientists who might have trained any time in the last 30 years, doesn’t yet reflect that diversity.

There is still a significant gap in certain fields, though. 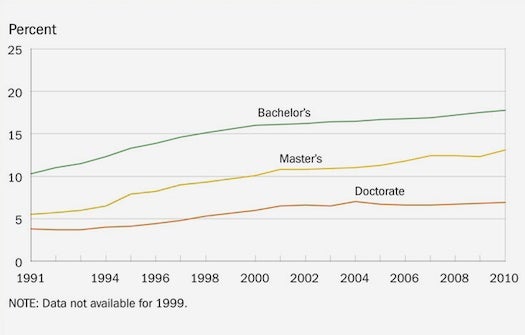 For full-time academic scientists of all stripes, median salaries are pretty similar. They start at about $50,000 for freshly minted doctorates and hit about $80,000 after more than a dozen years of experience.

Underrepresented minorities have made smaller gains than women in ivory towers across the U.S. In 1993, 3.8 percent of full-time math and science professors were black or Hispanic. In 2010, 5.9 percent were.

Women and underrepresented minorities are less likely to receive federal grants to do research, too, a phenomenon the National Institutes of Health have begun to track.