The Science of Speed

Swifter suits, shoes that lean and gaming the pistol are just the beginning of the tech innovations giving track the runaround this summer 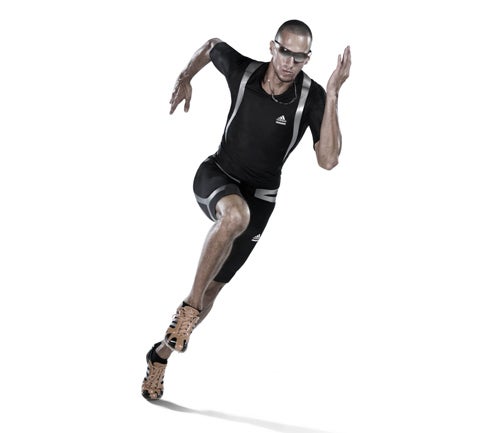 Every four years, we watch. We marvel at badminton, wonder about the modern decathlon and proudly pause for synchronized swimming. With more than 300 gold medals awarded across 37 disciplines, the next two weeks of our lives should be impressively unproductive. To aid in your immersion, we continue with our new series: “know your Olympic sport.” It’s part reminder that people actually get medals for this stuff (see: trampoline gymnastics) and part introduction to the science behind the sports.

In our second installment, we leave the ping pong balls on the porch and head to the track. Inside you’ll find shoes that don’t match, a suit not made by Speedo, an excuse for why you never won races in high school; along with a plea for some better technology. Andalé!

With every left turn a NASCAR car makes, the right and left side tires are stressed unequally. Manufacturers often counter that blatant imbalance with side-specific suspension (and even tires). But, racecar drivers aren’t the only athletes loyal to lefts in pursuit of a finish line. Sprinters show an equal prejudice against right turns. So if cars race with side-specific settings, should sprinters lace-up different shoes? Adidas and 400m world champion Jeremy Wariner think so. The Lone Star shoe is the first mid-distance set of spikes sporting different stud patterns on the left and right shoe. 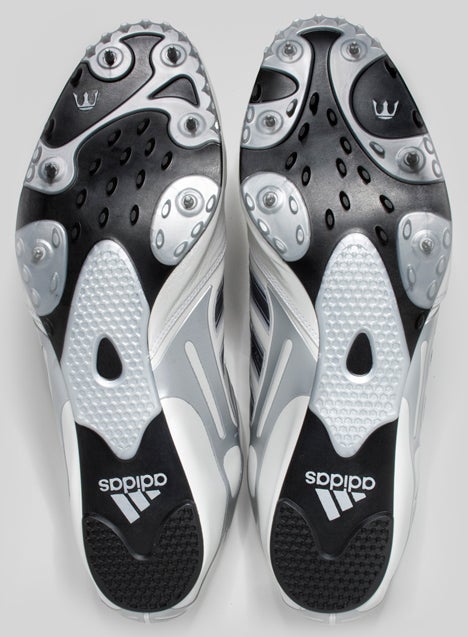 “We know mid-distance races are won and lost in the curves so we looked at what he already does the best and created the finest curve running shoes in the world,” said Mic Lussier, Adidas Innovation Team Leader. These shoes let Wariner “push even better in the turn and provide him with even more physical confidence, stability and efficiency.”

High speed video footage and pressure mapping was used to analyze the biomechanics of both feet around a turn. The results suggested that the left foot was used for stability while the right powered through the turn. The greater force exerted by the right foot required an alteration to the spike design.

The shoe also sports a carbon nanotube reinforced full-length plate that is one-third the thickness and one-half the weight of Wariner’s previous kicks. Even the spikes themselves have been redesigned to avoid cutting into the track that wastes energy pulling the spike back out. A retail version is likely but won’t hit shoe stores anytime soon, so for now little Billy will need to cut back on the Twinkies. 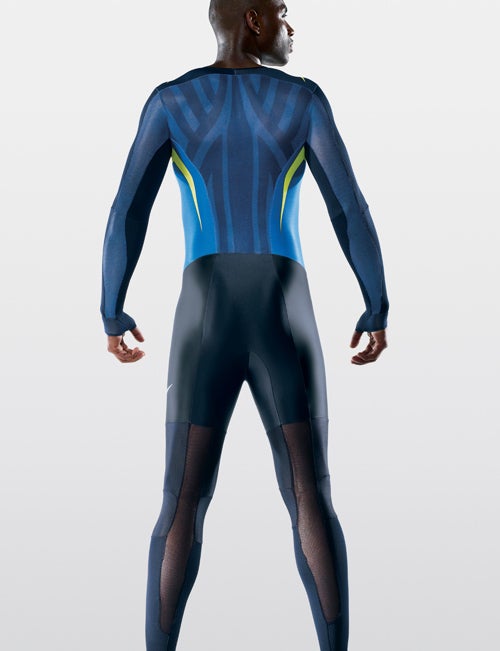 It’s a suit capable of significantly reducing drag and cutting crucial time off of short distance races. (Sound familiar?) This one, though, is branded with a Swoosh and doesn’t like to get wet.

Back in 2000, Nike figured out that skin is slow and launched the original Swift track suit in Sydney. For Beijing, the latest iteration claims a seven percent decrease in drag compared to that worn in Athens. Good data for the fluid dynamics model you’re working on but sprinters are more impressed by the .02 seconds Nike claims that savings converts to over 100 meters. That’s about how much the world record normally gets broken by. This is also the first time Nike is offering this suit in pieces (sleeves, singlet, socks) for athletes who feel confined by the full suit. The gloves have a dimpled fabric to cut through the air quicker (think golf balls) while the yarn is all recycled polyester salvaged from soda bottles and other scrap. Engineers even developed a new method for integrating graphics onto mesh panels intended for cooling that uses half as much yarn; this allows for more art on the suit without sacrificing performance. Think Nike might have a symbol in mind?

So much for the speed of sound. Data reported in the June issue of Medicine and Science in Sports and Exercise says sprinters located closer to the start gun get out of the blocks 15 milliseconds slower than their competitors. When the intensity of the gun was increased from 80 decibels to 120 db there was a 10 ms decrease in response time as well. While we’re on the subject, isn’t the starting gun a bit outdated? How about some form of beep that comes out of each start block? Maybe it could sing the NBC Olympic theme or the national anthem of the host country?

When is a world record not a world record? When it’s windy out. In sprints, the long jump and the triple jump a tailwind of greater than 2.1 meters per second (that’s 4.7 mph) nullifies a record time. In June, Tyson Gay ran the 100m in 9.68 seconds breaking the record by 0.04. Or so he thought. In fact, a stiff breeze meant Usain Bolt held onto his record while Gay cursed the Gods for breathing too hard. Anybody else find this absurd? With all the money poured into sports research and technology (see this series) can’t we find a more sophisticated way to account for Mother Nature?

A 1985 study calculated how much time wind can cut off a race (0.18 seconds over 100 m for a 2 m/s wind). That was 23 years ago. There’s even a ten cent Website nowadays that’ll calculate the advantage for any speed wind (Popular Science doesn’t vouch for its accuracy, but you get the point). Why not put some technology on the track that runs along with the athlete and provides an exact amount of time to add?

Even the wind readings are suspect from a scientific perspective. A single wind gauge is held halfway down the track—not exactly an adequate sample size. So, come on readers, develop something for London 2012 and we’ll profile it four years from now.