The Bible has at least a little to say about how to construct a building, but mostly in Proverbs and... 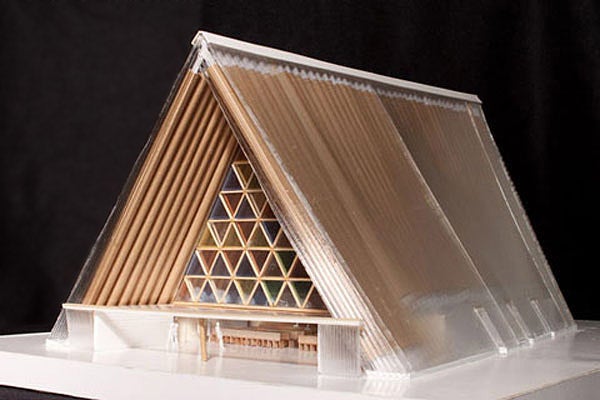 The Bible has at least a little to say about how to construct a building, but mostly in Proverbs and mostly not having anything to do actually building a structure (metaphor!). So without rock solid instructions, officials overseeing the Christchurch Cathedral–the one in Christchurch, New Zealand, that was all but leveled in February’s 6.3-magnitude earthquake–plan to build a 700-seat cardboard cathedral as a temporary replacement.

Japanese architect Shigeru Ban is heading up the design effort, which is currently in the midst of a $50,000 feasibility study. If the plan is approved, Ban plans to erect a massive 78-foot-high A-frame cathedral from cardboard tubes that will sit upon a foundation of 20-foot shipping containers (and we’re pretty positive that building plan is nowhere in the Good Book).

Don’t be misled by the term “temporary.” This structure is meant to serve as a stand-in for Christchurch Cathedral–the city’s iconic landmark–for a full ten years. It will cost about $3.4 million and could be erected in as few as three months. And try not to associate cardboard with “temporary” either–Ban has been building cardboard structures since 1989 (including a church in Kobe, Japan and several temporary housing buildings in Haiti), and he builds them to last.

Known as an “emergency architect,” Ban is a big proponent of cardboard as a building material, particularly after natural disasters when the prices of building materials spike. It’s cheap and abundant, it recycles when you’re done with it, and it’s surprisingly strong. In a pinch, you can usually get your hands on a lot of it fast at low cost.

If the plan is approved, the cardboard cathedral may be swiftly built to open on Feb 22 of next year, the one-year anniversary of the earthquake. That means a lot of cardboard will have to be erected in quite a hurry. But it’s silly to think of the strength of a building in terms of how much time you spend moving heavy materials into place, Ban says. After all, he said in remarks to Christchurch Cathedral officials, paper buildings don’t collapse during an earthquake.