From intestines to tracheas, tissue engineers are building a handful of new body parts — but progress on larger organs has... 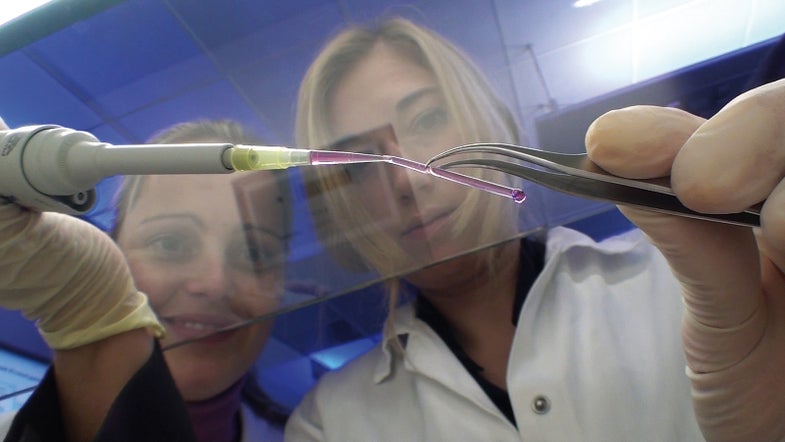 From intestines to tracheas, tissue engineers are building a handful of new body parts — but progress on larger organs has been slow. This is mainly because tissues need nutrients to stay alive, and they need blood vessels to deliver those nutrients. It’s difficult to build those vascular networks, but now a team from Germany may have a solution: Print some capillaries with a 3-D printer.

Engineers at the Fraunhofer Institute for Interfacial Engineering and Biotechnology IGB developed special printer inks containing synthetic polymers, as well as biomolecules that will prevent the artificial tissue from being rejected. Chemical reactions turn the printed material into an elastic solid, allowing the researchers to build highly precise three-dimensional structures.

Though 3-D printing can be quite detailed, the researchers needed an extra layer of precision to build the fine, feathery structures to serve as capillaries. They used two-photon polymerization to do this, according to a Fraunhofer news release. This involves brief, intense blasts of laser light, which stimulate finely tuned molecular crosslinking. Once the tiny vessels are made, they are seeded with endothelial cells, which form the innermost walls.

Other attempts to grow artificial blood vessels have used gel matrices or even hammering a nail into an electrified plastic block, which both create fine tubes through which fluid can flow. This new method is another way to precisely control the structures’ formation.

The next step would be to build entire organs, vascularized with this new printing method. Those may never be transplanted into a human, but they could be used as a test bed for new drugs or therapies, replacing animal subjects in clinical studies. Transplanting synthetic organs is still farther into the future, the Fraunhofer team says.

The team will present their work at the Biotechnica Fair in Hanover, Germany, next month.