Video: They Sure Don’t Make Pyrex Like They Used To

A change to heat-resistant glass has had explosive effects 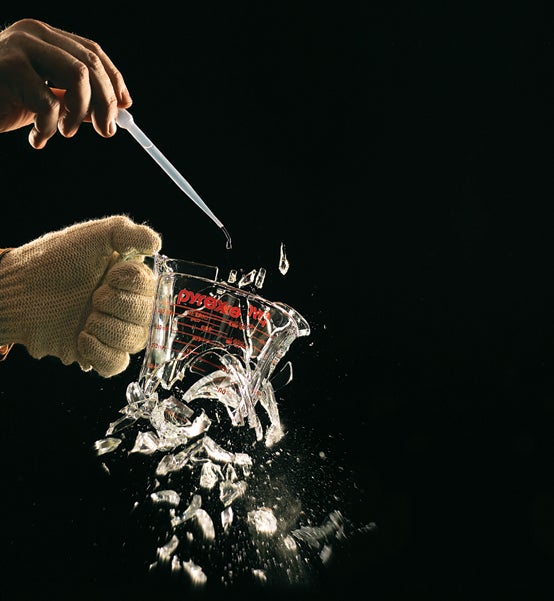 Most people probably don’t think of Corning as a crime fighting company, but when it sold its Pyrex brand to World Kitchen in 1998, the company accidentally made the illegal manufacture of crack cocaine more difficult—a fascinating example of unintended consequences.

Ordinary glass shatters if it’s heated too quickly: Pour boiling water into a common flintglass tumbler, and it’s likely to fall apart seconds later. The glass on the inside expands when it gets hot, putting stress on the cold glass on the outside. When the stress gets too great, it cracks.

Pyrex, which originally was always borosilicate glass, solved this problem by adding boron to the silica (quartz), the main ingredient in all glass. Boron changes the atomic structure of glass so it stays roughly the same size regardless of its temperature. Little thermal expansion means little stress. Thus borosilicate glass withstands heat not because it’s stronger, but because it doesn’t need to be stronger.

When World Kitchen took over the Pyrex brand, it started making more products out of prestressed soda-lime glass instead of borosilicate. With pre-stressed, or tempered, glass, the surface is under compression from forces inside the glass. It is stronger than borosilicate glass, but when it’s heated, it still expands as much as ordinary glass does. It doesn’t shatter immediately, because the expansion first acts only to release some of the built-in stress. But only up to a point.

One unfortunate use of Pyrex is cooking crack cocaine, which involves a container of water undergoing a rapid temperature change when the drug is converted from powder form. That process creates more stress than soda-lime glass can withstand, so an entire underground industry was forced to switch from measuring cups purchased at Walmart to test tubes and beakers stolen from labs. Which just goes to show, if you think you know all the consequences of your decisions today, you’re probably wrong.