Golf Cart Powered by the Spirit (and Engine) of a Truck

One day late last year, Bill Rulien decided he’d had enough of people boasting about how they had modified their... 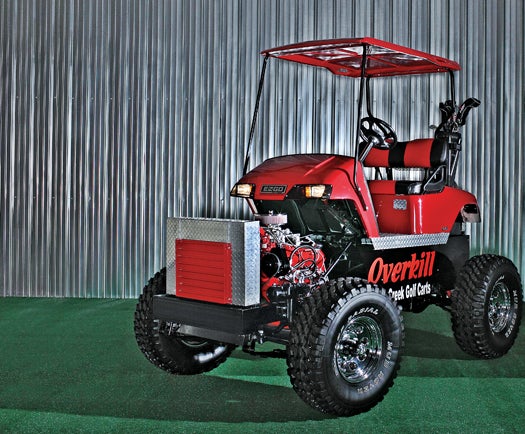 One day late last year, Bill Rulien decided he’d had enough of people boasting about how they had modified their golf carts with hotrod paint jobs or monster-truck tires. “I thought, I’m gonna build something that will say, ‘Well, top this.’ “

Rulien owns several golf-cart sales shops in the Midwest, so he had his choice of bodies. What he needed was a bigger engine. He picked out a cart that he’d been selling for parts and yanked the electric motor, transmission and drivetrain. Then he bought an old International Harvester Scout truck that had been rusting in a yard nearby and brought it to his shop.(The brakes were shot—when Rulien backed the truck off the trailer, the Scout immediately rolled through a fence and halfway up a berm.)

Rulien kept the V8 engine, drivetrain, steering and transmission from the Scout but removed all the other parts, and he began cutting up its chassis to fit the tiny cart’s body so it wouldn’t just look like a toy car sitting on top of a truck. He shortened the Scout’s driveshaft as well, but he still had to connect the two vehicles. With steel he had lying around, he fabricated a frame that joins the cart’s body with the truck’s chassis.

The two parts seemed to get along with each other, except for one serious glitch: the cable from the gas pedal didn’t reach down to the engine. “I figured that would be the easy part,” Rulien says, “but it ended up as a lot of going back and forth.”

Once he had finally mated cart and truck and had everything running smoothly, he took the entire body apart again to improve its looks. Rulien says the finished cart could clear 120 mph and use its four-wheel-drive system to tear up even the deepest sand traps. He is waiting until golf season to really push the vehicle, but it has already made an impression. When a truck driver eyed the beast, he declared, “Jeez, that’s overkill!” And thus was she christened. 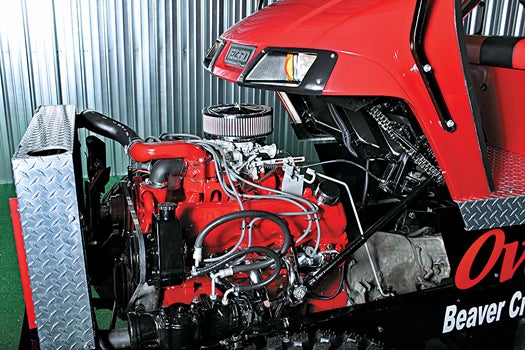 “Every vehicle I own is red. I’m a red kind of guy,” Rulien says. For the Overkill build, he added the International Harvester Scout’s red engine and painted the shock absorbers and the driveshafts.

There won’t be any shifting to four-wheel on the fly: The driver has to get out and reach under the cart’s floor to change into off-road mode. The good news is that despite the original Scout’s brake problems, Overkill can stop because Rulien replaced all the brake lines and calipers. The truck’s master brake cylinder still worked, but Rulien moved it from the engine area to the middle of the vehicle, under the seat. “There was no real room up front,” he says, “and I wanted people to just see the engine.”

The Scout’s rear axle had large suspension springs for off-roading, but Rulien swapped in shorter, heavy-duty ones from a trailer. That let him shrink the truck’s wheelbase and get closer to cart scale, but it also means riders will feel every bump in the road. “We didn’t care about the ride,” he jokes.

Rulien doesn’t plan to rip up any golf courses with his V8 cart; he’s thinking about showing it off in parades and events. Either way, the look was important to him, so he searched for the right add-ons—chrome headers for the engine, aluminum diamond plating—and spent four 12-hour days grinding and cleaning the Scout’s chassis to get it ready for painting.