A Simple, Tentacle-Like Prosthesis Gets a Grip, to Leave the Biological Hand Free

If it wouldn’t be completely ironic to do so, we could write at length about the value of elegance in... 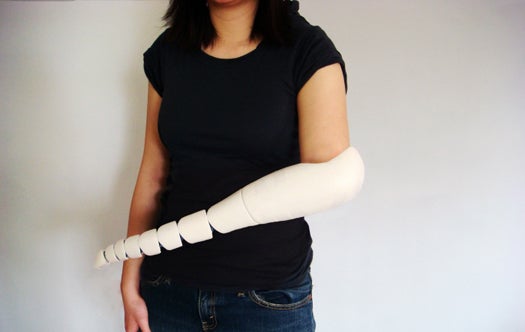 If it wouldn’t be completely ironic to do so, we could write at length about the value of elegance in simplicity. Instead, we offer by way of example this tentacle-like prosthesis designed by recent U. of Washington industrial design grad Kaylene Kau. It’s simple, both aesthetically and mechanically, and it solves a problem smartly.

Prodded by one of her professors to think differently about upper-limb prostheses, Kau found – perhaps not surprisingly – that prosthetics really work as assistants to the functioning limb. The resulting design is flexible and adjustable, providing a grip that changes to accomodate the object. The amount of curl in the arm is controlled by two buttons mounted on the prosthesis, which direct a single motor to either increase or decrease curl via two cables running the length of the arm.

It doesn’t measure up to the ambitious prostheses pursued by DARPA or DEKA Labs; it doesn’t plug into the nervous system or recreate the missing five-fingered hand synthetically. But it’s not trying to. What it does, at least in concept, is offer a feasible, immediate solution to problems faced by those missing a partial limb. And it does so without great complexity or expense. You won’t praise for virtues like simplicity and affordability often from PopSci (no one wants to take teleportation holidays to robot-populated moon cities as much as we do), but when something works, it works.