Dr. Rat will sniff you now 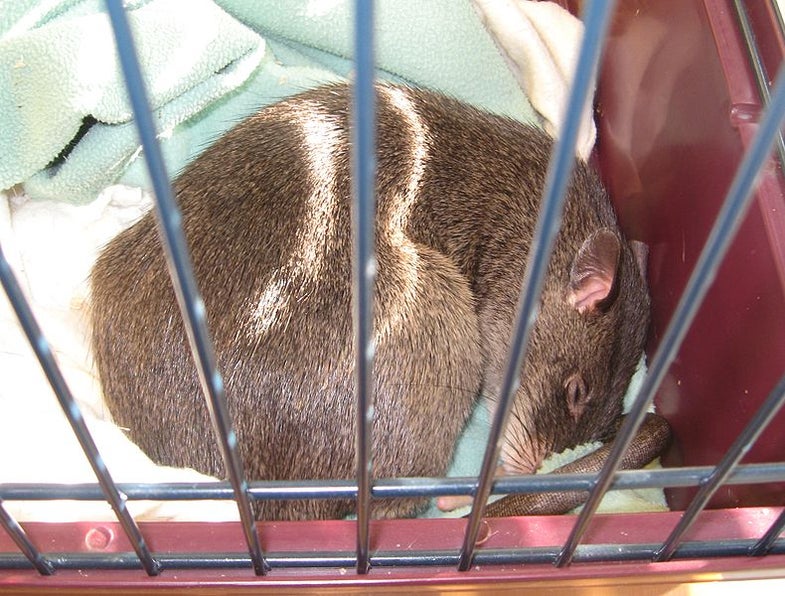 A 10-pound rat wouldn’t normally evoke feelings of appreciation, but perhaps it should — apparently it can save lives by sniffing out tuberculosis. Rat disease recognition is much more accurate than microscopes, researchers say.

Gambian pouched rats, which are widespread in Africa, are being trained to smell Mycobacterium tuberculosis, the bug that causes TB. In a study at Western Michigan University, rats were able to smell the difference between TB bacteria and the other germs found in human phlegm, reports the New York Times.

The rats’ ability to detect TB was as high as 86.6 percent, and their ability to rule it out was over 93 percent, the Times says.

Most TB tests involve staining a sample of phlegm with a special compound and examining it under a microscope. This 100-year-old method is notoriously unreliable, however — as many as 60 to 80 percent of positive TB cases are undiagnosed, partly because the bacteria are hard to spot unless there’s a lot of them in the sample. But the rats were able to sniff them out, detecting 44 percent more positive cases in a head-to-head competition.

More modern tests involve expensive lab equipment — last month, the World Health Organization endorsed a new machine that can provide accurate results within two hours, but it costs $17,000, and each test requires a $17 cartridge. Rats, as the Times points out, come cheap.

Many other animals are prized for their ability to smell sickness — we’ve seen dogs that can smell cancer and mice that can detect avian flu in bird droppings, for instance. The rats in the new study were born in Tanzania and trained from four weeks of age to differentiate between TB-containing phlegm and TB-free phlegm. When the rat spent longer at a known positive sample, it was rewarded with peanuts and bananas, the Times reports.

Gambian pouched rats have also been trained to sniff out land mines, because they are too small to set them off. They’re native to Africa, where TB remains a major health concern. Worldwide, TB killed an estimated 1.7 million people in 2009, and 9.4 million people developed active TB, according to the WHO. Eventually, the rats could be used as a first line of detection for the disease, scientists say.