Cold plasma torches could be a new way to treat drug-resistant infections and heal wounds more quickly, according to new... 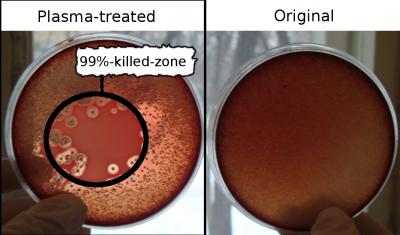 Cold plasma torches could be a new way to treat drug-resistant infections and heal wounds more quickly, according to new research. The plasma interferes with microbial DNA without harming human tissue, scientists say.

A 10-minute treatment with a low-temperature plasma jet killed about 90 percent of drug-resistant bacteria infecting lab rats, according to a study to be published in the January issue of the Journal of Medical Microbiology. It involves a blowtorch spewing ionized gas around 95 degrees to 104 degrees F.

German and Russian researchers say the torch was able to kill 99 percent of the bacteria in a lab-grown biofilm and 90 percent of the bacteria in infected rats. The researchers tried it with Pseudomonas aeruginosa and Staphylococcus aureus, which are both ubiquitous in hospitals and can cause wound infections, especially in people with weakened immune systems. Both are resistant to a wide range of antibiotics.

Svetlana Ermolaeva, who led the research, said plasma therapy kills the bacteria by interfering with their DNA and surface structures — a key in fighting P. aeruginosa and S. aureus, which grow in protective biofilms. Thicker biofilms still show some resistance, but plasma treatment could be a new treatment where traditional antibiotics don’t work.

Plasma is a state of matter involving a collection of free-moving electrons and ions. Usually, high energy is needed to produce it — like a sudden electrical discharge (lightning) or nuclear fusion (a star) — but it’s tricky to make plasmas at atmospheric pressures and room temperatures. Even in cold plasmas, electrons are superheated to thousands of degrees. But by ionizing less of the molecules in a plasma, scientists can produce plasma whose heat is distributed to non-ionized molecules, making it cool — or at least lukewarm — enough to handle.

Eventually, plasma treatments could represent a better option than antibiotics, because microbes will not be able to build up resistance, Ermolaeva said.