When Chilean officials contacted NASA seeking advice from the space agency on how to keep 33 miners trapped in a... 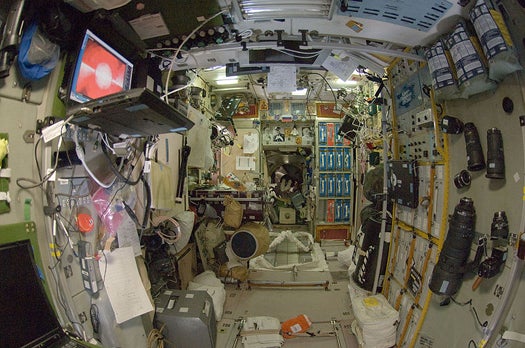 The cramped, isolated quarters inside the ISS provide a good model for the conditions experienced by the miners trapped in Chile. NASA is advising the Chilean government on how to keep the miners physically and mentally healthy while they await rescue. NASA
SHARE

When Chilean officials contacted NASA seeking advice from the space agency on how to keep 33 miners trapped in a tiny subterranean chamber both physically and mentally healthy, we wondered what that advice might be. NASA officials are now in a meeting to hash out exactly what they might be able to do to help the Chileans, though its still unclear what kind of advice or assistance they might provide.

NASA is still waiting for Chile to provide them with a list of specific questions, but in the meantime they’re considering how their extensive life science research can apply to the miners’ plight. And that plight is serious; with the men trapped nearly half a mile underground, the rescue could take four months. Of particular controversy right now is whether or not to tell the miners how long the rescue will take.

NASA knows a good deal about the psychology and physiology of living in close quarters. It regularly trains astronauts on such issues prior to long stints aboard the International Space Station and has been sending men and women into long periods of close isolation in spaceflight environments since the 1960s.

Whether NASA can — or will want to — advise on the psychological ramifications of informing the miners of the fact they likely won’t see daylight until Christmas is up in the air. But it is already offering physical survival tips to Chilean officials, who are communicating with the miners through a 6-inch-wide hole reaching from the surface to the survival chamber below.

Of particular concern for Chilean officials is keeping the miners physically fit, and NASA could be particularly helpful in this regard. NASA keeps its astronauts on very particular regimens of exercise and diet when in flight, as illness in confined spaces is obviously far from ideal. Moreover, the miners are being piped supplies from the surface, but officials have warned them that they cannot put on weight while they await rescue, as the shaft rescuers are drilling will only be 26 inches wide. The Chilean health minister’s office has already sent a tape measure down to them so they can keep tabs on their waistlines.

The miners lack the exercise equipment that’s present on the ISS, but NASA physicians should be able to help Chileans plan exercise regimens and diets that will keep the miners limber in a space no bigger than a small apartment. Spaceflight experts should also be able to offer guidance on how the miners can best maintain healthy sleep schedules in an environment where night and day are irrelevant.

As for the mental states of the miners, maintaining sanity in such isolated, crowded quarters for such a length of time is unprecedented even for NASA. Board Games and music have already been sent down to the trapped men to help them pass the time — how you get a Monopoly board down a six-inch borehole might be another good question for rocket scientists — and a few of them have even asked for a cold one. And why not? As long as it’s a light beer.