Think your car runs like crap? A sewage utility in Bristol, UK, has converted a Volkswagen Beetle to run on... 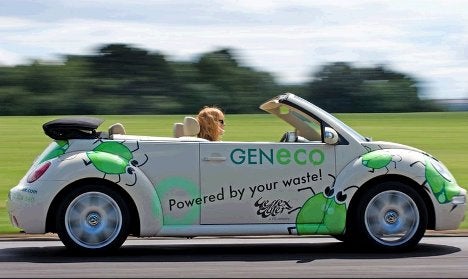 Think your car runs like crap? A sewage utility in Bristol, UK, has converted a Volkswagen Beetle to run on human waste. The Bio-Bug is the first car in the UK to run on byproducts of sewage processing, and if its trial run is successful Wessex Water, the utility company that made the car, might build a whole fleet of them.

Wessex’s Avonmouth sewage treatment plant was already producing methane gas, which it refined from the waste treatment process and used to power the facility. But there was surplus gas available and the company didn’t like to see it going to waste. So they decided to build a sustainable car.

Doing so wasn’t necessarily easy or cheap — GENeco (a subsidiary of Wessex) had to import special equipment, to refine the biogas to an extent that it didn’t adversely affect the car’s performance. But Bio-Bug is now running efficiently enough that just 70 local homes can power it for a year, assuming an annual mileage of roughly 10,000 per year.

Sewage-to-methane conversion is just the first step of GENeco’s eco-ambitious agenda. The company soon plans to begin recycling food waste at their plant — perhaps a smart move since recent studies have suggested Americans alone discard more energy in food waste than is produced by all of the oil and gas reserves laying off American shores. More waste means more bio-methane means more cars can run on the stuff which, by the way, does not smell foul when it’s burned in the car’s engine.

It’s not a permanent fix for the world’s oil dependency problems obviously, but it is a good way for a public utility to run an energy neutral operation while reducing its own fleet’s need for gasoline, reducing both carbon emissions and costs to the public at the same time.