Can We Dispose of Radioactive Waste in Volcanoes? 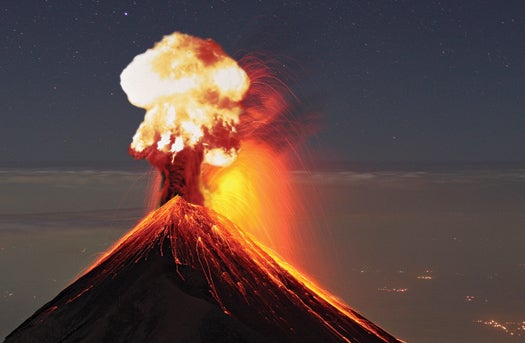 Dumping all our nuclear waste in a volcano does seem like a neat solution for destroying the roughly 29,000 tons of spent uranium fuel rods stockpiled around the world. But there’s a critical standard that a volcano would have to meet to properly dispose of the stuff, explains Charlotte Rowe, a volcano geophysicist at Los Alamos National Laboratory. And that standard is heat. The lava would have to not only melt the fuel rods but also strip the uranium of its radioactivity.

Lava in the hottest volcanoes tops out at around 2,400˚F. (These tend to be shield volcanoes, so named for their relatively flat, broad profile. The Hawaiian Islands continue to be formed by this type of volcano.) It takes temperatures that are tens of thousands of degrees hotter than that to split uranium’s atomic nuclei and alter its radioactivity to make it inert, Rowe says. What you need is a thermonuclear reaction, like an atomic bomb—not a great way to dispose of nuclear waste.

Volcanoes aren’t hot enough to melt the zirconium (melting point 3,371˚) that encases the fuel, let alone the fuel itself: The melting point of uranium oxide, the fuel used at most nuclear power plants, is 5,189˚. The liquid lava in a shield volcano pushes upward, so the rods probably wouldn’t even sink very deep, Rowe says. They wouldn’t sink at all in a stratovolcano, the most explosive type, exemplified by Washington’s Mount St. Helens. Instead, the waste would just sit on top of the volcano’s hard lava dome—at least until the pressure from upsurging magma became so great that the dome cracked and the volcano erupted. And that’s the real problem.

A regular lava flow is hazardous enough, but the lava pouring out of a volcano used as a nuclear storage facility would be extremely radioactive. Eventually it would harden, turning that mountain’s slopes into a nuclear wasteland for decades to come. And the danger would extend much farther. “All volcanoes do is spew stuff upward,” Rowe says. “During a big eruption, ash and gas can shoot six miles into the air and afterward circle the globe several times. We’d all be in serious trouble.”

Ask Us Anything
March 2010
Science
volcanoes