Can Microwave Technology be Used to Make Food Cold?

Microwaves can transform a frozen pizza into hot, melted goodness in four minutes flat, but they can’t rescue your melted... 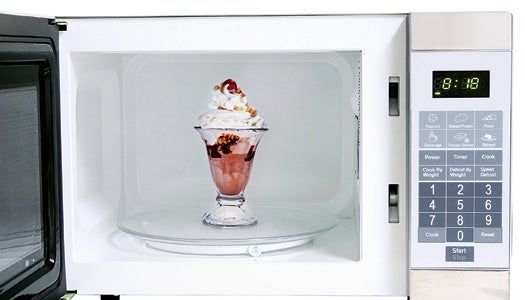 Microwaves can transform a frozen pizza into hot, melted goodness in four minutes flat, but they can’t rescue your melted ice-cream sundae. To cook food, a microwave oven converts voltage into high-frequency electromagnetic microwaves. The molecules in food—especially water and fat—absorb this energy and wiggle at high speeds, causing them to heat rapidly and warm the surrounding food. Although quickly turning leftovers cold would be handy, this is a one-way operation, explains David Pozar, a professor and microwave expert at the University of Massachusetts. Microwaves can only speed up atoms, not slow them down.

Scientists do have a high-tech method for slowing atoms, however: lasers. Shoot a moving atom with a laser, and it will absorb the laser’s photons and re-emit them every which way, causing the atom to hold nearly still. Placing an atom at the junction of multiple beams can slow its momentum in all directions, decreasing its energy and cooling it.

This drops an atom’s temperature a couple hundred degrees Fahrenheit—much colder than anything you’d want to put in your mouth—in less than a second. But because it works most efficiently on low-density gases of atoms of a single element, physicist Mark Raizen of the University of Texas doesn’t think it will be useful for cooling food anytime soon: “Not unless you can subsist on a thousand sodium atoms.”

Ask Us Anything
January 2010
microwaves