Diamond may remain the preferred material for wedding rings, Lil’ Wayne’s birthday gifts, and Damien Hirst sculptures, but it looks... 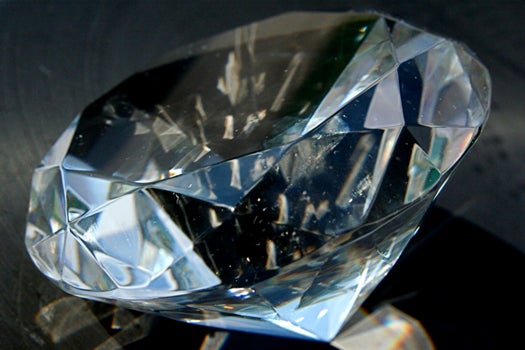 Diamond may remain the preferred material for wedding rings, Lil’ Wayne’s birthday gifts, and Damien Hirst sculptures, but it looks like girls’ best friend will have to relinquish its title as the hardest natural substance known. The new title holder: mysterious carbon compounds found in a Finnish meteorite.

Writing in the journal Earth and Planetary Science Letters, Tristan Ferroir, a professor at the University of Lyon, France, reports that his team has discovered two new materials harder than the precious stone. Ferroir discovered the compounds when a diamond-coated sander failed to file down pockets of the compound nestled inside of the meteorite, which fell in 1971.

Ferrior has seen carbon nodules, fused by the heat of atmospheric entry, resist the diamond sander before, but only in one direction. These new minerals are the first ever to remain uniformly invulnerable from every direction.

Of the two minerals, one is a kind of diamond that had been predicted by scientists decades ago, but never observed in nature. The other is truly novel, having formed from fused sheets of graphite in a manner similar to the method used in the production of artificial diamonds.

Due to the small quantities of each mineral, Ferroir has been unable to test precisely how hard they really are. For now, all we can do is speculate about the limits of their hardness, and hope that they don’t weaken Superman.