And all it takes to measure is a simple spinning disk here on Earth. When reached for comment, Dark Matter says: "Come on, you almost found me!" 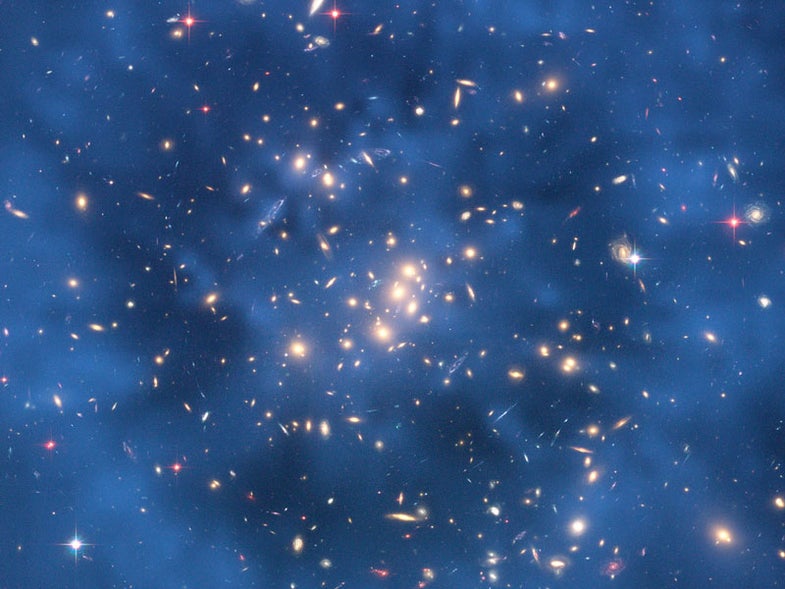 Dark matter’s status as a mysterious and invisible lurker in the universe has frustrated scientists for years. Now, one hopes to solve the puzzle a different way: using a modified version of Newton’s second law that would eliminate the need for dark matter altogether. Researchers in Brazil have devised an experiment that could put the modified Newtonian dynamics (MOND) to the test, New Scientist reports.

Much indirect evidence for dark matter — supposedly 25 percent of the mass in the universe — comes from observing its invisible gravitational effect on visible galaxies and their stars. Deep underground experiments on Earth have attempted to directly detect the weakly interacting particles (WIMPS) that scientists believe constitute dark matter.

But dark matter’s existence is based on the assumption that Newton’s second law of motion holds true at all physical scales. In 1981, Israeli physicist Mordehai Milgrom hypothesized that Newton’s second law might change slightly at extremely small accelerations. That MOND proposal could in turn explain the irregularities astrophysicists have observed in the motion of galaxies and stars without the need for dark matter.

A team headed by Vitorio De Lorenci of the Federal University of Itajubá, Brazi devised an experiment that could finally try to directly test MOND. They discovered that certain points on a well-placed, precisely-controlled spinning disc can cancel out the acceleration of the Earth’s rotation, its orbit around the sun, and the orbit of the sun around the galaxy’s center.

Canceling out all those interfering accelerations would allow for a measuring device mounted on the disc’s rim to work unimpeded. If Newton’s second law holds as usual, the device should not detect any unusual force. But if MOND holds true, the device should feel a strange kick.

That would allow scientists to at least see if all forces act differently at small accelerations or not. But the spinning disc would not test another version of MOND that proposes only gravity is affected. Such an experiment would need to take place in space.