Australian Aborigine mythology begins in a period known as the “dream time”, before the emergence of humanity. Many stories about... 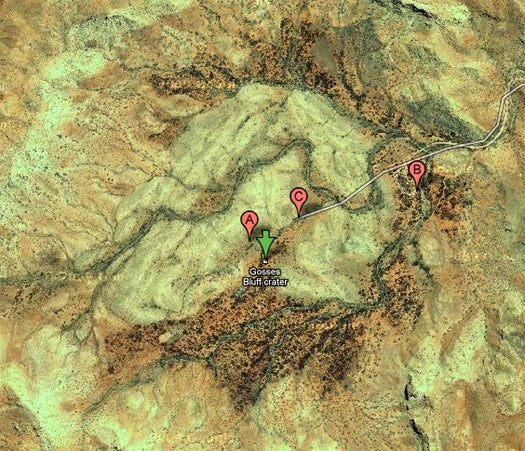 Australian Aborigine mythology begins in a period known as the “dream time”, before the emergence of humanity. Many stories about the dream time include legends about stars, gods, or rocks falling from the sky. And new research utilizing Google Earth surveys of the outback show that many of those myths may actually be historically accurate.

Writing in the journals Archaeoastronomy and Meteoritics and Planetary Science, Duane Hamacher, an astrophysicist Macquarie University in Sydney, Australia, describes how examination of Aborigine myths led him to discover previously unidentified blast crater about 81 miles south of the town of Alice Springs.

In the myth, a star falls to Earth at a site the Arrernte tribe call Puka. Hamacher located the Puka site on Google Maps, and sure enough, the image looked just like another blast crater, Gosse’s Bluff, which is located just west of Alice Springs and part of another Aborigine myth about something falling from the sky (this time a giant baby). Analysis of the magnetism and geology of the Puka site confirm that it is indeed the remnant of a meteor impact.

However, the impact occurred long before humans evolved. So how could the impact be part of the Aborigine mythology? Hamacher believes that the Aborigines witnessed enough actual impacts to correctly identify the resultant craters, and accurately deduced that the older, similar, formations must have resulted from the same kind of event. Which is pretty much the same thing scientists do with Google Earth now.