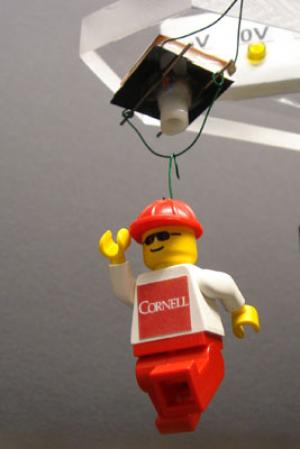 Leaping tall buildings, punching through solid concrete walls and using public phone booths as ersatz changing rooms without anyone noticing are still beyond human capacity, but a development at Cornell University might allow us to walk on walls like Spider Man, or even dance on the ceiling like Lionel Richie.

Employing the same surface tension that makes two wet, flat surfaces stick forcefully together (think microscope slides), researchers at Cornell developed a palm-sized device consisting of a flat plate full of extremely tiny holes (on the micron scale) and separated from a liquid reservoir by a porous middle layer. Current form a 9-volt battery pumps water through the device, pushing tiny droplets through the top layer, creating many tiny points of surface tension that can grip another surface. Reversing the current causes the droplets to retract and the grip to cease, so the user can grip and release instantly and at will.

The individual bonds are weak relatively speaking, but enough of them together coupled with the ability to turn them on and off rapidly mean it could lead to such far-fetched applications as gloves or shoes that stick and un-stick to walls, or items like Post-it notes that are load-bearing (because we’ve all been waiting for a Post-it that can also patch a leaky radiator hose).

Inspiration for the device came from a beetle that uses a similar mechanism to adhere to surfaces with forces up to 100 times its own body weight. While biomimicry has produced its fair share of synthetic adhesives, including bonding agents for reconnecting the body’s tissues, the potential strength of this new device is novel. Researchers have found that the smaller and more numerous the holes on the top plate, the stronger the devices become. They estimate a one-square-inch device with millions of 1-micron (one-millionth of a meter) holes could conceivably take on a 15-pound load.

If that math holds true then the surface area on the sole of a single adhesive shoe could – in theory of course – support the weight of a human being as he or she traversed a ceiling. Oh, what a feeling.