It’s a bit cliché to kick off a story about NASA with “Houston, we have a problem,” but seriously, they’ve... 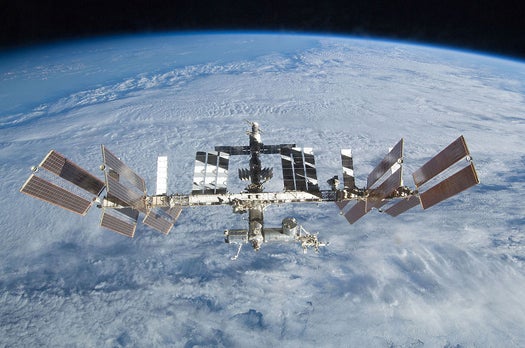 It’s a bit cliché to kick off a story about NASA with “Houston, we have a problem,” but seriously, they’ve got a problem: the plumbing on the International Space Station is clogged, and NASA isn’t exactly sure why, or how to fix it. To clarify, it’s not the actual toilet component that’s broken, but the $250 million system designed to recycle astronauts’ urine, sweat, and exhaled vapor into clean, potable water.

Engineers working on the problem believe high concentrations of calcium in the astronauts’ urine is causing deposits to build up, clogging the system that provides up to two-thirds of the water used on the station.

Before going into service in November 2008, the system was fully tested at NASA, but changes in the physiology of astronauts as well as the chemistry of astro-waste as it works through the processing system could be contributing to the problem. One theory holds that the higher calcium concentrations in the crew’s urine may come from the bone loss that inevitably accompanies a zero-G lifestyle, but that idea has yet to be proved.

In the meantime, engineers at Marshall Space Flight Center in Huntsville are scrambling to pull together a solution before Space Shuttle Endeavour takes off for the ISS on Feb. 7. If they can’t solve the cosmic clog by then, we suppose the station could always go back to dumping waste the way the space shuttles do. Or the astronauts could resort to simply holding it; the next nearest toilet is only 220 miles away.