The Telescope-Toting 747 That Sees More than Hubble 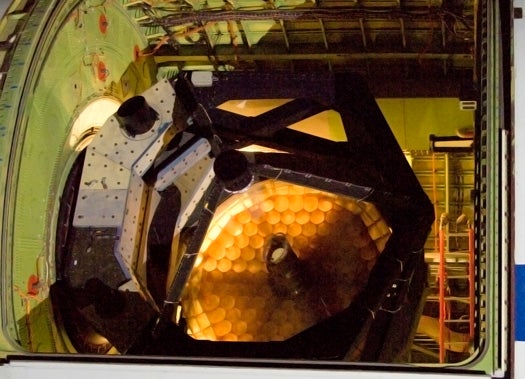 The SOFIA's 2.5-meter telescope, shown inside the plane that will carry it as it takes its first airborne images this spring. Courtesy Tom Tschida/NASA
SHARE

In the movies, opening the door on a plane at 45,000 feet is disastrous. But this spring it will be standard procedure on one 747—one carrying a telescope high enough to capture the cosmos better than ever before.

Built into the tail end of a Boeing 747, the Stratospheric Observatory for Infrared Astronomy (SOFIA) will soar above the atmospheric water vapor that blocks most infrared light from ground observatories, to shoot detailed images of star-forming nebulae, planets’ atmospheres and clouds of organic molecules. The 2.5-meter mobile telescope—operated by NASA and Germany’s space agency—will best the Hubble and Spitzer space telescopes by scanning the widest range of light of any scope, from ultraviolet to the far infrared. And because SOFIA is easier to design and maintain than a space telescope, it could be built and operated for a third of the cost.

Stargazing from a flying plane is no easy feat, but the scope’s non-pressurized, cooled compartment should smooth the transition to similar stratospheric conditions. And since test flights in 2007 (which earned SOFIA a Popular Science Best of What’s New award that year), engineers added a collar around the scope to cut turbulence. NASA’s pilots will fly the plane, but the telescope’s controls are integrated with autopilot to capture steady images. “Although we changed the plane to fly the telescope,” says SOFIA astronomer Dana Backman, “when we’re observing, the scope actually flies the plane.” 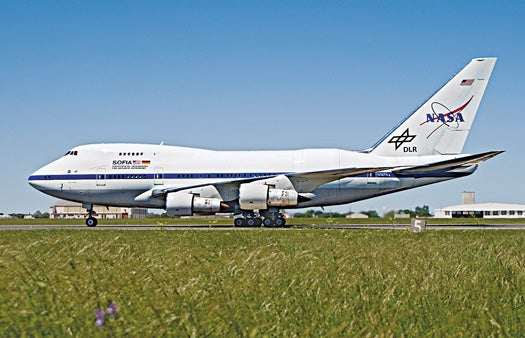