FYI: Why Don’t Loud Snorers Wake Themselves Up?

A husband’s snoring might keep his wife awake, but there are a couple of reasons he’ll sleep through his own... 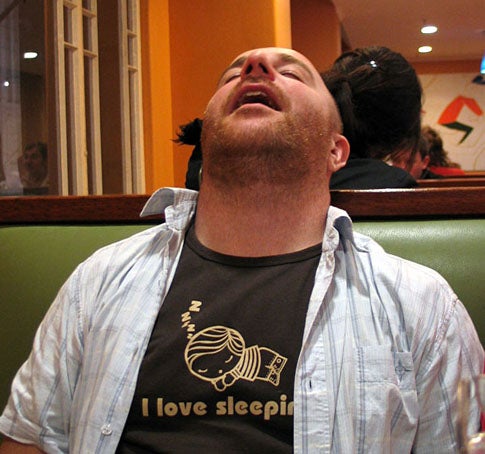 A husband’s snoring might keep his wife awake, but there are a couple of reasons he’ll sleep through his own rumblings.

Our ability to sleep through loud noises changes during the night as our body transitions between the different stages of the sleep cycle, explains Neil Kline of the American Sleep Association. Even snores louder than 100 decibels—which exceeds the volume of a fire alarm—may fail to wake snorers from deep “slow-wave” sleep.

But during the roughly 80 percent of the night that people are not in deep sleep, their snores can wake them up dozens of times; they just don’t realize it. A big snort will typically wake a person for only a few seconds, not long enough to fully awaken or to remember it the next morning, says Clete Kushida, the president of the American Academy of Sleep Medicine. As a result, snorers remain oblivious of their interrupted sleep. And if the wife was lucky enough to doze off at the same time as the snorer did, she’s probably oblivious to the interruptions as well. But ignorance isn’t bliss: This type of fragmented sleep can significantly increase sleepiness during the day.

Have a burning science question you’d love to see answered in our FYI section? Email fyi@popsci.com

Ask Us Anything
sleep