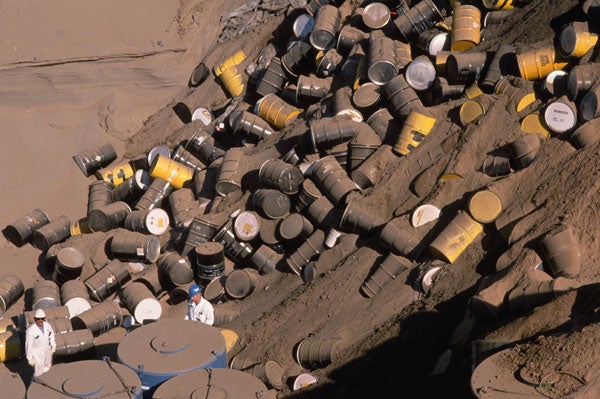 Later this year, scientists at Oak Ridge National Laboratory in Tennessee hope to take a big step toward solving America’s nuclear-waste woes. Pending clearance from the Department of Energy, they will demonstrate a new toxic-waste recycling process.

The aim of the demo-part of a controversial $405-million government project called the Global Nuclear Energy Partnership (GNEP)-is to transform nuclear leftovers into fuel for a new breed of reactors. The new reactor/fuel combo, GNEP officials say, could produce up to 100 times as much energy as conventional reactors and could generate 40 percent less waste.
The initiative is a key part of the Bush administration’s long-term strategy to meet America’s rising demand for electricity-according to the DOE, it’s expected to jump by 45 percent from 4,000 billion kilowatt-hours in 2005 to 5,800 billion kilowatt-hours in 2030-without creating more greenhouse gases. “Nuclear energy is the biggest source we have for meeting our energy needs without contributing to global warming,” says Sherrell Greene, director of the nuclear-technology program at Oak Ridge, one of the 13 potential recycling sites selected earlier this year by the DOE.

Another central GNEP objective is to deal with the nation’s growing nuclear-waste problem: The country’s 103 nuclear reactors produce 2,200 tons of radioactive waste annually, and there’s no good place to put it. Even if no new reactors are built, at current rates, the U.S. will have produced more than 94,600 tons of spent nuclear fuel by 2050, and the repository at Yucca Mountain in Nevada, America’s lone long-term solution to radioactive-waste storage, will stow just 77,000 tons when it’s slated to open in 2020.

Yet not everyone thinks GNEP’s strategy for recycling waste is the solution. Ivan Oelrich of the Federation of American Scientists, for example, says that the new type of recycled fuel would contain as much as 90 percent plutonium, making it a much more attractive target to a bomb-building terrorist. Spent fuel from traditional reactors, by comparison, contains only 1 percent plutonium.

GNEP officials reject this criticism. The new recycling process, they argue, will not isolate pure plutonium, making it more difficult to convert the leftovers into a bomb. Specifically, the process calls for dissolving spent fuel in nitric acid to chemically extract the nastiest 1 percent-the highly radioactive elements plutonium, neptunium, americium and curium, also known as actinides-as well as depleted uranium. (The remaining waste is stored in traditional casks.) The uranium is then re-enriched, recombined with the actinides, and compressed into fuel pellets for state-of-the-art reactors. In this scheme, waste is used repeatedly, transforming it into less harmful elements with each cycle.

The Oak Ridge demonstration is intended to be a miniature model (minus the reactors) of how this recycling process could work at the industrial scale. “It’s a synthesis of the whole process,” says Greene, who is working on the project.
In addition to pursuing scaled-down tests of the new recycling technology, GNEP officials will release a draft report this summer on the environmental impact of the potential sites. But the program’s defining moment will happen next year when the U.S. secretary of energy decides whether to step up the initiative and
build America’s first full-scale demonstration plant.