Everyone loves a good road movie, whether it’s Hope and Crosby or Fonda and Hopper. But the scope of those... 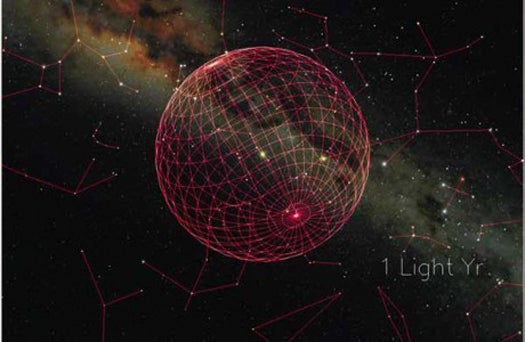 Everyone loves a good road movie, whether it’s Hope and Crosby or Fonda and Hopper. But the scope of those films pales in comparison to the ground covered by the Hayden Planetarium’s new video, The Known Universe. The video starts in Tibet and zooms out through time and space until it shows well, the entire known universe.

The video, created for the new Rubin Art Museum exhibit Visions of the Cosmos: From the Milky Ocean to an Evolving Universe, uses over a decade of data collected by researchers at the planetarium. Called the Digital Universe Atlas, the data encompasses the precise location of every object ever observed in the sky. From quasars to pulsars to black holes to nebulas, it’s all there.

The observable universe spans 13.7 billion light years, with the background radiation aftershock of the Big Bang as the oldest, and farthest, signal. At that end of the universe lies the oldest material in creation, which, thanks to billions of years of expansion, has accelerated to almost the speed of light. That layer forms an event horizon past which not even light can travel, ringing our universe in what is essentially an inside out black hole.

But enough of my yammering! Check out the video yourself, but make sure to budget some extra time for sitting in slack-jawed awe.