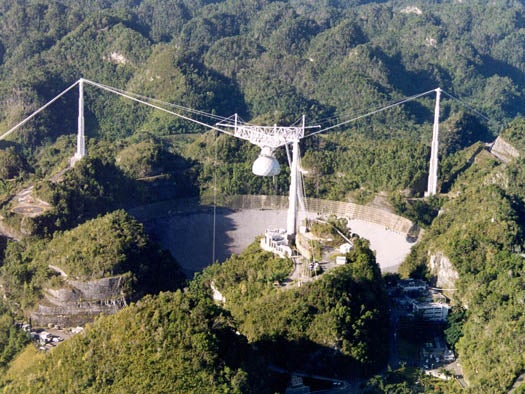 While most of the world looked forward to the switch from analog to digital TV for the sharper picture and clearer sound, astronomers around the US anticipated the changeover period for a totally different reason: clarity. In the brief period between the removal of analog television signals and the assignment of those frequencies to other devices like cell phones, astronomers will get their first look at a time in the universe that has been obscured from telescopes since Wally and the Beav roamed the airwaves.

Since the days of Philo Farnsworth, radio waves have carried television signals at the frequency of 700 to 800 megahertz. The density and power of those television signals drowned out any radiation from distant stars of the same wavelength.

But now, with the television signals turned off for the switch to digital, astronomers have added a special receiver to the Arecibo radio telescope that enables searches at these previously obscured wavelengths. In particular, astronomers hope to find pulsars, super-dense stars that emit radio waves at regular intervals.

Those astronomers better step on it, though, as cellphone companies have already taken over most of the wavelength space between 700 and 800 megahertz. Before long, the signals from those distant stars will once again fade away behind the noise of human traffic, with the signals from entire galaxies failing to break through the barrage of texts and app store downloads.