A new public health study released just in time for Global Handwashing Day (today!) offers not one but two gems... 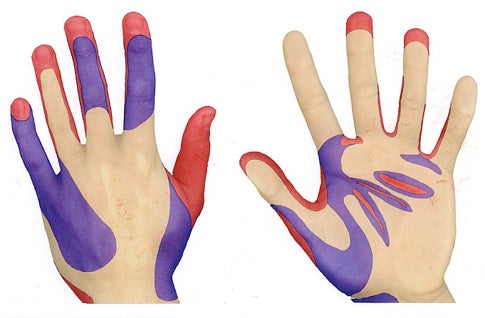 A new public health study released just in time for Global Handwashing Day (today!) offers not one but two gems of Science-Confirms-the-Obvious wisdom. Firstly: the gee-whizzer that men have poorer personal hygiene than women. Secondly, that people are more likely to wash their hands when others are watching.

In an aim to find the most effective message to encourage handwashing in public toilets, a research team from the London School of Hygiene and Tropical Medicine installed a LED screen at the doorway of a gas-station toilet on a British highway. It flashed a series of messages employing a variety of tactics familiar to anyone with a mother, such as:

Wireless sensors installed in the doorway and the soap dispensers secretly monitored a whopping 200,000 toilet-goers. The team found that 64 percent of female visitors reached for the soap, yet only 32 percent of the men did. (Compare that to surveys that report that ninety-five percent of people say they wash their hands after using a public toilet.)

What message got the most mileage? Although “Soap it off or eat it later” worked terrifically for men (presumably zeroing in on their complicated relationship to filth), “Is the person next to you washing with soap?” was the only message that increased the wash rate across both genders.

Yep, public shame. When someone’s looking, you can bet you’d lather up for appearance’s sake.

“It’s difficult to know what kind of message is most effective at changing this everyday behaviour, so it’s important to experimentally test what works best in a real setting,” says Robert Aunger, the study lead. “That way you can save money and make sure your programme will be effective prior to rolling out any public health campaign at great expense.”

In honor of Global Handwashing Day in the Year of Swine Flu — I encourage you to take shame to heart today, and suds up for the greater good.