When you get a stitch in your side, what’s really going on?

Doctors still don’t know what causes it, or how to stop it. 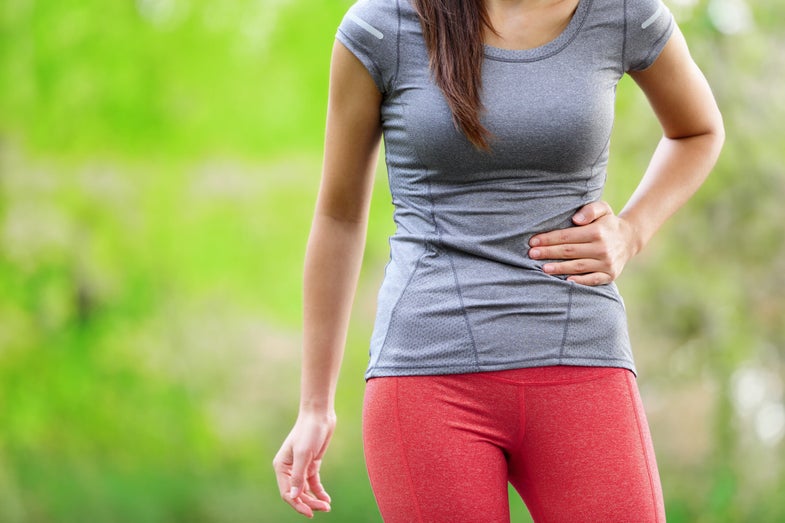 Runners know side stitches all too well. Deposit Photos
SHARE

This story has been updated. It was originally published on October 20, 2017.

Before the mile run each year in middle school, on the dreaded walk down from the classroom to the course, my classmates would argue over the best way to prevent a side stitch. More so than turning an ankle or coming in last, that repetitive stabbing pain is what the majority of us dreaded most. Our cures ranged across the map from taught techniques, like breathing in through the nose and out through the mouth and not eating for three hours prior, to my favorite: Punching yourself in the stomach at the slightest hint of pain (don’t try it, it doesn’t work).

There’s a medical term for that stabbing side cramp: exercise-related transient abdominal pain, or ETAP. And it’s far from rare. Around two-thirds of runners experience them every year. But unfortunately for middle schoolers, elite athletes, and weekend joggers everywhere, this medical term does not come with a medical solution. There’s no standard advice for how to prevent a side stitch, says sports chiropractor Brad Muir, because we don’t know the mechanism that produces the pain in the first place. “It’s still up in the air.”

That’s partly because, even though side stitches are common, researchers haven’t really studied them. In 2015, a review article noted that after a few studies in the 1940s and 50s, there was a nearly 50 year gap in research on side stitches. Despite that, there are some basic things that we do know about ETAP: It’s more common in younger people; the number of reported cases tends to drop off as people get older. The pain is more common in activities where the upper body twists, like swimming, running, and horseback riding. Athletes of all levels get side stitches—elite athletes get them less often, but their stitches are no less painful than the ones in amateur exercisers.

About half of athletes said that they thought their stitches were triggered by eating or drinking, and some studies back this observation up. In the lab, drinking liquids with high concentrations of sugar were more likely to trigger a painful cramp than beverages with little or no sugar. Things like body mass index, body type, and gender haven’t been connected to the frequency or severity of ETAP.

What we do know about side stitches, the symptoms and risk factors, don’t provide much information about the underlying cause of the pain. One common theory posits that, during exercise, not enough blood (and therefore oxygen) gets to the diaphragm and causes the pain—but side stitches still occur in activities like horseback riding, which don’t tax the respiratory system. “The explanation of it being just the diaphragm never really held up to more scrutiny,” Muir says.

[Related: Why do my muscles ache the day after a big workout]

Another explanation is that jolting movements during exercise put stress on the ligaments in the abdomen that hold the organs in place. That explanation accounts for the role of food and drink in ETAP—putting something in the stomach would make it heavier, forcing those ligaments to work even harder. But it doesn’t account for the high rate in an activity like swimming, where muscle movements are smooth.

Bad posture or problems with a runner’s gait could also be a factor in ETAP, Muir says. There’s some evidence that playing around with certain vertebrae in the spine could reproduce the particular pain from a side stitch, indicating that biomechanical fixes could help with the problem. Friction and irritation in the tissue of the abdominal wall is yet another explanation.

One of the reasons it’s difficult to pin down an explanation for ETAP, Muir says, is that there are so many different components of the problem, and not all of them apply to each case. Four people might come in with their pain on the right side, for example, and then the next three all have the problem on the left. Muir says that it’s rare to have no clear explanation for an abdominal pain. “It seems to be in a class almost of its own.”

Because we don’t know exactly what causes a side stitch, Muir says there’s no standard advice for how to prevent it. The best thing to start with, he says, is a quick rundown of your history: Did you drink a lot of water before that run where you had a particularly bad cramp? Is there something you usually eat on days you’ve had an issue? If you play a sport, he says, the next step might be to have someone check out your form, and make any biomechanical adjustments.

Typically, ETAP will stop when you stop the activity. If it doesn’t, or the pain gets worse, Muir says it’s best to check in with a doctor to rule out any other gastrointestinal or abdominal problems unrelated to exercise.

But usually, side stitches, while incredibly annoying, are innocuous. And there’s no gold standard to make them go away, Muir says. “It’s all sort of trial and error.”

Ask Us Anything
Fitness & Exercise