Optimus Prime came home and got a day job. 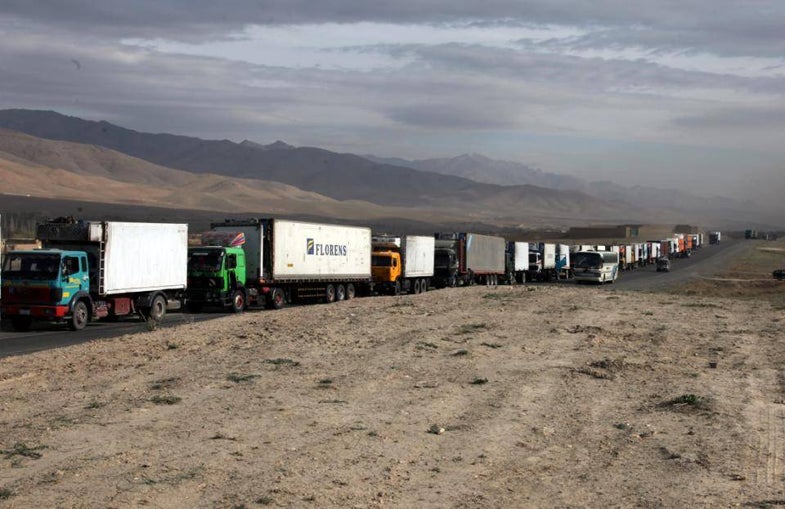 Like Olympic skiers racing in single file to reduce air resistance, two 18-wheeler trucks in Nevada recently proved that uncomfortably close convoys can save drivers fuel and money. The key, instead of bold Olympic athleticism, is robotic assistance. A computer-assisted truck was able to follow closely behind a human-driven truck perfectly, maintaining exactly 33 feet of distance between the vehicles. The promise is a future of safer, more fuel efficient, and more robotic trucking.

While Nevada is a friendly state for driverless cars, the system tested is only partially automated, with a driver in the computer-assisted truck still responsible for steering. In a way, that makes this a very, very advanced cruise control. The technology, developed by Peloton Tech, uses radar and a wireless link so that the following trucks travel at the same speed, braking simultaneously for safety, and doing so on an automated system that doesn’t have the delays of human reaction time. In addition, the drivers of both vehicles also have a video display, expanding both drivers’ vision and reducing blind spots.

Besides safety, the major selling point of this system is that the reduced drag saves fuel costs. Peloton says the “technology saves more than 7% [of fuel] at 65mph – 10% for the rear truck and 4.5% for the lead truck,” which is tremendous because “Long-haul fleets spend 40% of operating expenses on fuel, accounting collectively for over 10% of U.S. oil use and related carbon emissions.” These savings come primarily from reduced aerodynamic drag.

In Europe, countries have been testing a similar, albeit more autonomous, technology for a few years now. Dubbed SARTRE (Safe Road Trains for the Environment), it lets a vehicle find a leader, link up, and then follow along autonomously. No word yet if it inspired existential angst in the human drivers who are no longer needed.

Watch video of the trucks in action below. It goes really well with C.W. McCall’s 1975 novelty hit “Convoy,” which inspired the similarly odd 1978 trucker film “Convoy.”