Roborace Cars Will Have NVIDIA Supercomputers for Brains 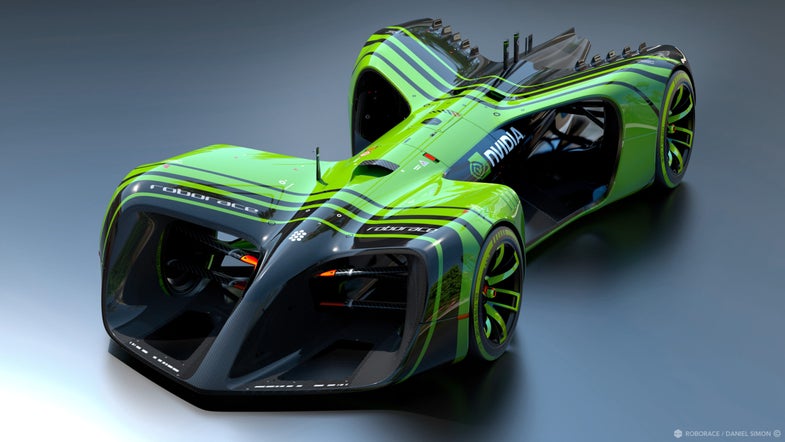 When Formula E officials announced late last year that there would soon be an autonomous support series called Roborace, people were skeptical. But when the radical design for the driverless race cars was unveiled recently, people were a bit more intrigued. Now, computing powerhouse NVIDIA has announced that it will be providing AI supercomputers for the cars, making the whole Roborace series seem less like science fiction and more like just science.

Since the Roboracers won’t have drivers, they’ll have to have sophisticated computer brains running algorithms to navigate the track and make decisions. The NVIDIA Drive PX2 supercomputer is built to handle the high performance demands required during a race. It can process as many as 24 trillion operations a second, with processing power equal to about 150 MacBook Pros, according to NVIDIA’s company blog.

All this power is required to process the information coming into the computer at a fast and furious pace—lidar, radar, cameras, and GPS will all be feeding the deep-learning AI brain of the Drive X2. It seems like a lot to cram inside Daniel Simon’s sleek, wasp-waisted, futuristic design, but the Drive X2 fits inside a case the size of a lunch box.

There will be 10 Roborace teams, each with two cars, and all twenty cars in the series will be identical except for the software. Each team will be responsible for designing the algorithms and AI that will perform best during the one-hour races.

Alejandro Agag, CEO of Formula E, said in a press conference before the recent Faraday Future Long Beach ePrix that the Roborace cars are already being built. They’ll be ready for “shows” at Formula E races in the 2016-17 season, he said, but not for all-out racing. Agag noted that the race car’s design “is like an arrow; it has a direction,” and it seems to be aimed directly at the future of racing and robots.