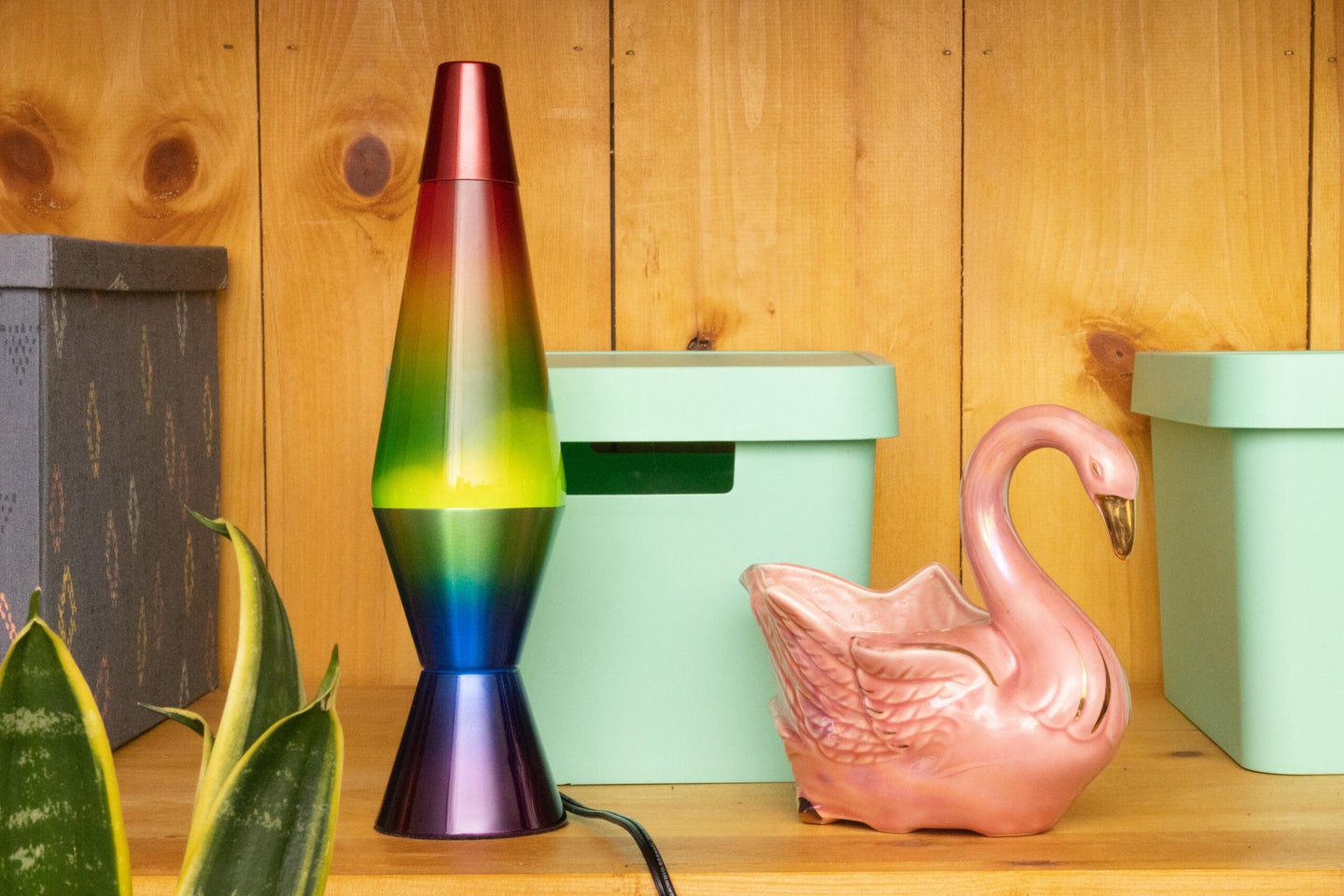 Our smartphones currently fill that role but, back in the 1960s, the humble lava lamp once filled that role with hypnotic blobs of wax. People love to stare at glowing objects. While a solid half-century has passed since the lava lamp’s heyday, these iconic sources of illumination have maintained a level of kitsch that appeals to everyone from boomers who saw Pink Floyd back in ’72 to Zennials who just found the Classic Rock section of Spotify and won’t shut up about it. The best lava lamp for you is largely a matter of taste, but the selections on this list have everything you need to turn on and zone out for a few hours.

How does a lava lamp work?

Look at a working lava lamp and you’re witnessing an elegant example of a scientific concept called a convection current. The glass container holds a series of wax blobs suspended in a liquid like water or sometimes mineral oil. The wax and oil/water are immiscible, which means they won’t mix, similar to how oil and vinegar remain separated in a salad dressing bottle

A simple light bulb sits below the glass enclosure and heats up the contents, but it does so in an uneven way. Wax sitting on the warm bottom of the jar heats up and becomes less dense, which causes it to travel to the top of the lamp. It cools down as it gets farther from the heat source, which causes it to contract and sink back down to the bottom—where it starts the process all over again. So, if someone calls your lava lamp “stoner decor,” casually inform them that it’s simply a shrine to the elegance of fluid dynamics.

How we picked the best lava lamps

We’re not going to pretend that we’re lava lamp experts, but we did go out of our way to actually spend some time staring deeply into these colorful tubes. We chose models that were reliable, attractive, and most importantly, affordable. In addition to our hands-on experience, we considered user impressions and spec comparisons to pick the best possible models.

What to look for in the best lava lamps

We’ll be blunt: Lava lamps aren’t the most sophisticated kind of ambient lighting you can add to your space. For that, you want a useful desk lamp, or perhaps the best LED strips to give your room that Twitch streamer vibe. Lava lamps are largely a novelty and you should keep that in mind when comparison shopping. There are a few things to consider before you decide on the best lava lamp for you, however.

Lava lamps typically stand between 12 inches and 2 feet tall. Obviously, you want something that fits in your space, but you’ll also want to consider how patient you are when you’re waiting for those globs to start their dance. Larger lamps contain more liquid, which requires more heat to get things moving.

Most of the time, you’ll find that the height refers to the total height so the actual glass area (which companies typically refer to as the “globe”) will be shorter than that.

The phrase “lava lamp” typically evokes an eclectic, psychedelic color pallet akin to what you’d find at that store in the mall that always smells like patchouli. That’s usually correct but it’s not always the case. Some lava lamps embellish their look even more by adding glitter and other fun pollutants into the mixture to liven up the light show. Others tone it down just a bit and give off more of an ’80s art deco vibe. None of them are particularly subtle, though, so if you’re looking for something to complement your Kanye-style all-white living quarters, maybe it’s time to get a regular lamp.

It’s worth paying attention to how the companies add the color to the lamp. Some add dye directly to the wax and liquid, while others use neutral substances inside and paint the outside of the container. Those painted on the outside may lose a bit of their luster after regular cleanings, but they’ll look more vivid in the meantime.

Again, these are novelties, so some models will pull out all the stops to keep you entertained and set themselves apart from a sea of similar products. Some play music or even rotate. Generally speaking, we recommend something simple because once the novelty wears off, you might regret spending the extra cash to get the fancier lava lamp.

With the specs out of the way, it’s time to dive into our specific picks. As you’ll see, there’s not a ton of variety out there in terms of form factor and price ranges. You can find some extra features floating around if you want them, but again, we recommend you get something simple that you can appreciate for a while without getting bummed if it breaks.

Why it made the cut: It’s truly a classic lava lamp that won’t overwhelm your room with psychedelic nostalgia.

The Lava Colormax really gives you the classic lava lamp experience. The base, cap, and glass all sport a tri-colored design that would feel right at home in a retro-styled room or maybe the back of a conversion van that has a dragon painted on the side of it. At 14.5-inches tall, it’s not overwhelmingly huge, and the 25-watt bulb makes it glow without bathing much of your room in light. I put it in the corner of our living room during our testing and found it less gaudy than I expected. It takes a solid two hours to really get the lava moving around inside the glass container, but that’s standard across pretty much every model we’ve tried.

Because it gets its tint from paint on the outside of the glass, the colors look bright and vibrant. If you want something you can stare at after having altered your mind, this will do the trick with aplomb.

Why it made the cut: Make sure you get the big one if you want to make sure everyone who enters your house says, “Hey, is that a lava lamp?”

It looks a bit like a trippy missile, but this 16-inch lamp’s size helps it make a statement in a room. Green wax floats around in blue-ish liquid, which gives it a very sci-fi vibe. We know it’s wax in there but if you wanted to pretend it’s some kind of alien ooze, you could likely do so while still moderately sober.

The wax and liquid inside the chamber contain the dye that gives the lamp its color, so you don’t have to worry about paint flaking off of the exterior. The silver base lets the actual lava part of the lamp take center stage without visually competing. It’s big and relatively cheap, so it’s hard to go wrong here.

Why it made the cut: One device provides your trippy music and visuals thanks to a built-in speaker and a Bluetooth connection.

For just a little more money than you’d spend on a typical lava lamp, you can get this model with a Bluetooth speaker built directly into its base. Despite the 16.5-inch height, the speaker itself is relatively small, so manage your expectations when it comes to sound quality and volume. It has a basic Bluetooth connection that can be a bit finicky but it’s perfectly capable of jamming out some Hendrix tunes if you don’t have anything more robust.

The lava aspect of the lamp involves orange globs floating in purple goo, which provides a nice contrast. Despite a rather large light bulb, it’s not overly bright and it gives off more of an ’80s feel than a ’60s vibe. You can turn on the light or the music by themselves or keep them both on at the same time. Pairing the Bluetooth is a little clunky since there’s only one switch onboard, rather than buttons or any kind of screen, but it’s hard to demand more for under $50 (plenty of the best Bluetooth speakers cost that, or more, sans trippy visuals).

Why it made the cut: Painted glass and a black base make this unique compared to its competition.

Pink, blue, and yellow splotches adorn the outside of this 14.5-inch lava lamp. It sits on a black base, which makes the colors pop more than they would against a more colorful top and bottom. At 14.5 inches, it’s on the shorter side, which allows it to heat up relatively quickly, though that still means you’ll be waiting a couple of hours for it to reach full glob ballet mode.

If you want to avoid the sci-fi or hippy vibes, this provides a nice alternative. The name calls it “graffiti” but it looks more like random spray paint, which will appeal to some and not others. Despite the various colors of paint on the lamp, it gives off a mostly pink glow, so plan your other decor accordingly.

Why it made the cut: Your kid wants a lava lamp and you want one that won’t catch on fire, but also doesn’t cost very much.

Maybe you want a white elephant gift and you’re on a budget. Maybe your nephew once mentioned that he liked a Doors song and that’s all the information you have about him. There are plenty of reasons to want a cheap lava lamp and this 14.5-inch model fits the bill.

It has a painted glass container that matches its metallic base and cap. It’s not too big and it heats up relatively quickly (two hours or so) despite its tiny bulb. Did we mention that it’s cheap?

Q: How much does a lava lamp cost?

If you’re paying more than $50 for a lava lamp, you’re probably doing it wrong. You’re paying for a tube of goo and wax with a very cheap light bulb underneath it. These are simple, fun devices and you shouldn’t go all out unless you’re a real connoisseur. You can also make one on your own if you want to be super cheap about it.

Q: What is the safest lava lamp?

The safest lava lamp is the one you put in a place away from potential accidents and then never touch. Most lava lamps are simply light sockets hooked up to a basic cord. They generate heat out of necessity. Keep them away from flammable materials, don’t touch them when they’re on, and keep them away from kids who might want to taste the forbidden lava inside.

Q: Can you leave a lava lamp on all the time?

Nope. You should turn your lava lamp off when you’re not home or when you go to sleep. If you’re not actively gazing into it or trying to set a real mood, you should turn it off then, too, because you’re just burning electricity for no reason.

While lava lamps may not be the classiest lighting solution to spruce up your home, they’re undeniably fun. When people come over, they’ll say, “Oh, cool, is that a lava lamp? I haven’t seen one of those in forever!” While you can get a ton of different styles, we recommend going with something classic and fun. Just don’t touch it once it’s on.