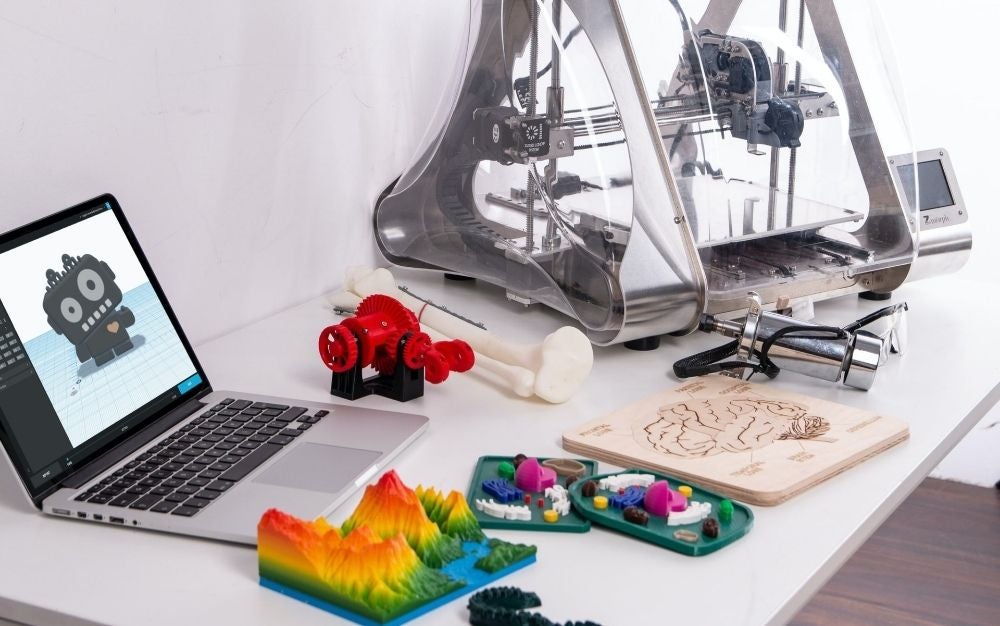 3D printing has come a long way from its clumsy infancy. Today the best 3D printers are great for hobbyists, professionals, and everyone in between.

The 3D printer, when it first arrived, seemed right out of the future: you can create anything at all, crafted of a steady stream of plastic. Lost a chess piece? Print a new one. Need an adapter for the sink? Print one. The possibilities are endless. But sometimes, the choice of which of the best 3D printers to buy can also feel endless. Here’s how to find the best model for you.

What to consider when purchasing a 3D printer

Today’s offerings, the best 3D printers, are generally designed for two markets: home and office. Home 3D printers tend to be more affordable—lately, some of the best beginner 3D printers have been getting down under $300, which is a far cry from the thousands they used to cost. These are great for toying around with, teaching yourself (or your kids) modeling software, and seeing what kinds of crazy stuff you can create out of seemingly thin air.

Professional 3D printers are much more expensive but show the full capability of this moment in time in the 3D-printing world. Architects can quickly build out perfect scale models. Manufacturers can skip the entire go-to-the-factory tour and spit out a prototype in minutes.

Luckily, some of the best home printers are also some of the least expensive 3D printers. After all, the needs of a home user are not quite as particular as a professional in an engineering lab. That doesn’t mean you’ll be skimping on features, though; these 3D printers, no matter how affordable, can do some truly amazing stuff.

Some of the professional 3D printers require some experience with CAD design—yes, we know, the D stands for design already—software, which can feel overwhelming for newbies. But there are plenty of machines that are beginner-friendly, enabling you to download designs and print them right out.

How will you set up a home 3D printer?

The best home 3D printers—meaning, not a professional system designed for businesses—are typically smaller, ideally a bit cheaper, and hopefully, come pre-assembled. Home 3D printers should be able to connect via a simple USB cable to your computer, although WiFi connectivity is a nice option to reduce the amount of cord clutter around your home.

You’ll also want to look at print resolution. This metric is measured in microns, and the smaller the number is, the sharper the image. You can think about it like you’re building out of LEGO blocks: if you only use a few larger blocks, you’ll have a very blocky, rough sculpture. But use a lot of smaller blocks, and you can create more natural-looking curves and shapes. For a home 3D printer, look for around 50 microns in resolution.

What about 3D printer kits?

Many 3D printers, including the Prusa i3, come in two versions: one is pre-assembled, and one, for a discounted price, requires assembly by yourself. In general, we don’t love the assembly-required versions, as they can be very finicky and tricky to put together. This isn’t quite an Ikea couch; these gadgets are complex, and any errors in construction can totally mess up your final prints.

Once you go down into the less expensive units, you often won’t find any assembly-required options at all. These are more grab-and-go printers, designed for ease of use, and frankly, we like that. Especially because using these printers as an educational toy for kids is one of their best attributes, and the assembly is often too difficult for them. Instead, grab a kid-friendly, pre-assembled unit.

What if I need a small 3D printer?

3D printers can vary in size from a small shoebox to, well, literally house-sized. The smaller 3D printers are often a great option for those with a limited amount of desk space, or perhaps for those with no need to print anything all too large.

Given that many 3D printers can cost thousands of dollars, you’d be forgiven for looking at a less expensive printer with some suspicion. You’ll definitely be sacrificing something, but the nice thing about cheap 3D printers is that you can choose what you want to give up. Are you okay with a slightly lesser printing resolution? Or would you rather sacrifice how large the printed objects can be? Or do you want to build the printer yourself, opting for more barebones kits to save some cash? All of those are possibilities.

What about 3D printer kits?

If you really want to get in the weeds, and we’d understand if you do, a 3D-printer kit is a great way to both save some money and to really start to understand the intricacies of how these machines work—because you’ll have to build them.

It’ll take you a few hours to put these kits together, but there are tons of helpful tutorials on YouTube, and you’ll get the same kind of satisfaction that you might get from working on a car. If something goes wrong, you’ll know what, because you constructed the entire project. And the rewards for creating something that then creates something else? It’s fun wrapped in a riddle.

Dremel’s 3D45 printer is at the top of the heap for home 3D printers. It’s right on the line between a home 3D printer and a professional printer, but what allows it to claim this title as the best home 3D printer is its impressive software and ease of use. It relies on a version of the open-source Cura software, with a nice big touchscreen, which makes it surprisingly simple for beginners, given the extremely high print quality.

Depending on age and experience, kids and teens may prefer a typical, “adult-centric” 3D printer. But the Toybox is designed for younger kids, with lots of safety options (like non-toxic materials) and a super easy-to-use app for selecting and printing all kinds of fun toys.

The FlashForge Finder is a well-priced, diminutive 3D printer, but it doesn’t skimp on the features. It has a leveling system that guides you through the oft-annoying process of making sure the built platform is aligned properly. Plus, the build plate slides right out, which makes removing your printed object much easier. It also boasts a touchscreen for easy operation, and the build platform is designed to be cold, for safety reasons.

The Creality Ender 3 Pro is known for its high-quality prints, and the company does a great job of leading owners through the assembly process. It’s fully open-source, and there are lots of options for upgrading individual parts later, which makes it a great base for learning about 3D printing. It’s also surprisingly affordable! It isn’t the easiest 3D printer to use, but if you’re building a printer yourself, that’s likely okay with you.

Q: How much does a decent 3D printer cost?

You’d be surprised at how little a decent 3D printer costs these days. Today, you can find really fun, easy-to-use printers, often with formerly high-end features like touchscreens and WiFi connections, for under $500—sometimes even half that.

Q: Is getting a 3D printer worth it?

Whether a 3D printer is worth it depends on your use case. They’re great educational tools, and can be really fun toys, too: it never gets old to download some plans and then have them manifest as a physical object, right there at home. They aren’t necessarily practical for home use, in that you’re not going to be printing too many high-end sculptures or tools, but if you know that going in, you can really enjoy yourself.

Q: Which is the best 3D printer to buy?

The best 3D printer to buy will vary from person to person, depending on what you’re looking for. If you’re just curious about the tech and want to mess around with some gadgetry, we like Monoprice’s offerings for their combination of budget price and great features. If you’re really getting into it, the Dremel 3D45 offers some of the best print quality on the market.

The final word on the best 3D printers

The best 3D printers, whether they’re home printers, 3D printers for kids, detail-oriented kits, or even budget-friendly options, can be a truly mind-blowing home gadget. It’s incredibly satisfying to watch these machines spool plastic with such precision, creating something that you want seemingly out of thin air.