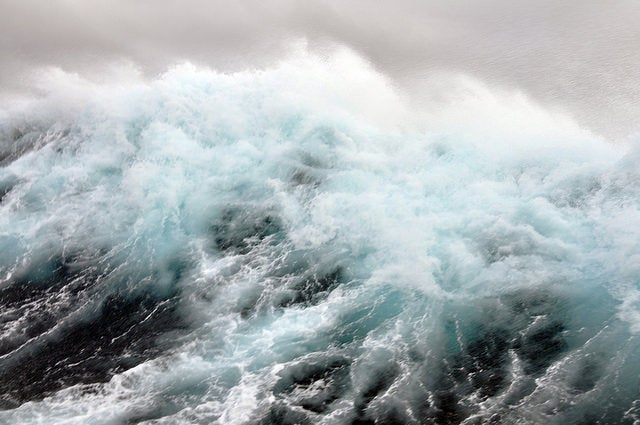 The colossus rolled through the North Atlantic Ocean on February 4, 2013. A buoy logged it between Iceland and the United Kingdom, following on the heels of a strong cold front.

The record—the highest significant wave height measured by a buoy—is actually an average taken from multiple waves, so some of them could have loomed even higher. Significant wave height is the average of the tallest third of waves a buoy measures. This “is comparable to what an observer would see as an average of about 15-20 well-formed waves over a period of about 10 minutes,” said the WMO.

It took scientists several years to analyze the buoy’s data, but the newly-crowned wave has set a “remarkable” record, said WMO Assistant Secretary-General Wenjian Zhang. “It highlights the importance of meteorological and ocean observations and forecasts to ensure the safety of the global maritime industry and to protect the lives of crew and passengers on busy shipping lanes,” he said in the WMO statement.

Buoys help scientists create forecasts and understand how oceans influence our weather. “Despite the huge strides in satellite technology, the sustained observations and data records from moored and drifting buoys and ships still play a major role,” Zhang said.

The previous record-holder was a 59.96-foot wave from 2007 that also brewed in the North Atlantic. The world’s highest waves tend to take shape in this area during intense winter storms or “bombs,” the WMO said. These storms can strengthen rapidly through a process called “bombogenesis,” notes Mashable, in which atmospheric pressure drops, prompting wind speeds to pick up.

Most waves out on the ocean are caused by friction between wind and the water’s surface (tsunamis are another heaping kettle of fish entirely; they are triggered by undersea disturbances such as earthquakes).

Sudden rogue waves can happen when storm waves form a current against the “normal” direction, causing them to join together, according to the National Oceanic and Atmospheric Administration.